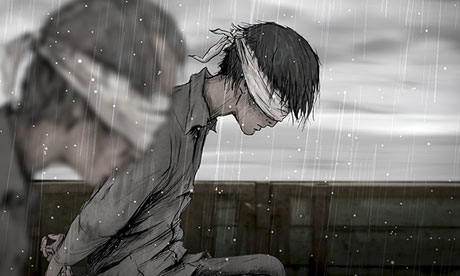 It’s been reported that North Korea has embarked upon several large scale public executions of up to 80 people after they were discovered to have watched South Korean movies and be in the possession of bibles.

In one such execution, women and children were herded into a sports stadium and forced to watch people being shot dead by machine gunfire.

A source went on to tell the executions took place on November 3.

JoongAng Ilbo, a conservative media outlet could not confirm the deaths, but said its source is familiar with the internal affairs of North Korea and had recently visited the country.

In speculating why the executions took place the paper went on to posit that the executions may have been a result of attempting to quell arrest and stop capitalistic ideology from growing especially in light of recent economic growth in certain areas.

JoongAng Ilbo reported that in Wonsan, in Kangwon Province, 10,000 people were ordered into Shinpoong Stadium, and forced to watch eight people, who were tied to stakes with sacks over their heads, being killed by machine guns.

Its source said: ‘I heard from the residents that they watched in terror as the corpses were riddled by machine-gun fire that they were hard to identify afterwards.’

Other executions took place in Chongjin in North Hamgyong Province, Sariwon in North Hwanghae Province and Pyongsong in South Pyongan.

And then there was this via huffpo that gives a sobering take on affairs in North Korea:

The highly reclusive state is known for its harsh attitude to outside influences.

The few defectors that manage to escape tell horror stories of atrocities and prison camps.

In a report from 2011 conditions in North Korea were described as some of the worst Amnesty had encountered in five decades of work.

Worryingly, Amnesty says that, far from improving, the situation is getting worse, with shocking images released this year by the charity, revealing the North is expanding the camps where the prisoners are said to be held.

The conservative JoongAng Ilbo cited a single, unidentified source, but at least one North Korean defector group said it had heard rumours

So you see – this rumor has been confirmed …. by a rumor.

North Korea doesn’t do that usually. That’s a demonstration of power. The question here is: Who’s the audience? Dissidents? Power hungry generals?

I agree, the situation in North Korea sucks. But there’s just nothing anyone’s going to realistically be able to do about it until, at the least, the government collapses and someone sane enough to ask for help ends up in charge.

They’ve stacked the deck too far against themselves. North Korea has brought themselves to this point and, fundamentally, it’s North Korea that’s going to have to change first before anyone can help.