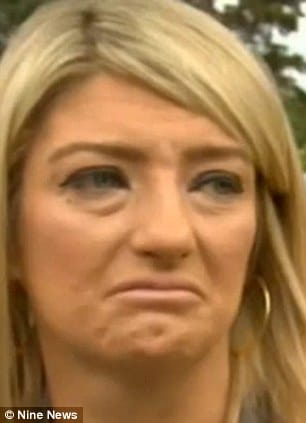 An Australian woman, Marie Lacombe has received the shock of her life after being served an itemized expense account from an older gentleman she had simply considered a friend. The bill came to her after she declined Bruce Dusting‘s offer of marriage.

The bill coming to $185 000 ($200 000 AUD) came to include expenses that the 65 year old suitor believed the 42 year old single mother had extracted from him, including Zumba classes, shopping trips and even cosmetic surgery. All the while Lacombe has maintained that there was never any romantic involvement.

Went on to tell a heart broken Dusting: ‘This Marie has just destroyed every thought of humanity that I’ve had for other people.’

The pair are said to have first met four years ago when Marie Lacombe first began to give Bruce Dusting dance lessons at a Melbourne dance studio. It wasn’t soon long after that the two became good friends with the older man often taking her for dinner and visiting her home regularly.

Bruce Dusting says the payments – of which he has kept careful records and include things like dental appointments, Tupperware and even birthday parties for her children, were all loans.

Of course one wonders why the loans as Mr Dusting insists they are only became payable after Marie Lacombe declined his marriage proposal?

That said, Bruce Dusting has since gone on to accuse Marie Lacombe of playing on his emotions to get more cash out of him. On one occasion, he claims, she asked him to lend her money she needed for emergency surgery.

Yet when he went to visit her in the hospital, he found that she had got breast implants and a tummy tuck.

Marie Lacombe tells a different story. She insists that despite one loan of $23 ooo (AU$25,000) the rest was given to her out of kindness.

She went on to tell that much of the money Bruce Dusting has asked her to return were given to her in the form of unsolicited gifts.

Marie Lacombe has also flatly denied asking Bruce Dusting for any money for her cosmetic surgery.

Furthermore, she tells she worked as his office assistant for four years and never received a penny for her time.

“Where’s my money for working for him for four years? When he can sit down and give me my pay back, we’ll do the difference,”

‘At the end of the day things took a turn for the worse when I said no to getting married to him,’ she said.

The woman claims that the billing is simply a way for Bruce Dusting to get even after she rejected his marriage proposal.

SInce the falling out between the two, Bruce Dusting has told that he will no longer be going to dance lessons

‘I’ve probably still got the ability within, physically. Mentally I still have the ability,’ he said.

‘But, emotionally, it’s just not there any more.’