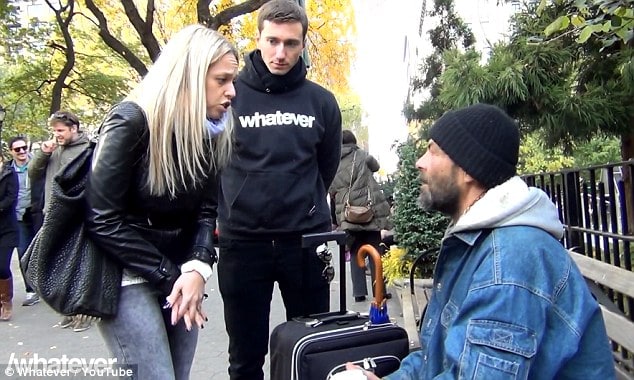 Homeless man, Jaroslav Nemcovsky has been offered a new lease on life after strangers decided to band and come to the down and out man’s aid.

Having arrived from his home town outside of Prague, the Czech Republic this past September for a job in Orlando, Florida, Nemcovsky soon found himself out of luck after losing his job.

Desperate to seek work the man then made a bid to travel to Manhattan, NYC in the hope of securing work.

Yet once there, Nemcovsky found himself being robbed after falling asleep whilst charging his cell phone at Port Authority.

At the time the homeless man came to be robbed of $1000 in cash, phone, passport and even his shoes.

With no money, no passport and no shoes, Nemcovsky thought he would die on the harsh, and increasingly wintery, streets of the Big Apple.

But all that changed when Brandon Levithan, owner of clothing company Thread Society, and his friends came across him sitting solemnly in Union Square last weekend.

Told Levithan who  was distributing warm clothes to the city’s poor at the time: ‘We didn’t think he was homeless. We weren’t sure we wanted to approach him,’

In an endearing YouTube video that has now gone viral, Levithan is seen approaching Nemcovsky, who doesn’t speak English but was able to communicate with Levithan’s girlfriend, Simona Kanevsky in Russian.

‘I explained to him that we were a clothing company giving out sweatshirts, hats and gloves,’ Kanevsky said. ‘I asked if he wanted anything and all he responded with was, “I just want to go home… to Czech.”‘

From there the couple and their friends took Nemcovsky who hadn’t showered for two weeks to a nearby hotel where they got him cleaned up, gave him new clothes and fed him.

They then took him to a corner barber for a shave and a hair cut.

Told Kanevsky: ‘He was so grateful, explaining to me that he has never had a beard so long in his life and hasn’t been able to shave in two months,’

The Czech Consulate was able to replace Nemcovsky’s passport, but gave him no other help in getting home.

After 10 days of sleeping in a homeless shelter, he said he was kicked out and, when Levithan and his friends found him, he was sleeping in Union Square.

Describing how he just wanted to get home and see his son and daughter, he teared up.

The group left Nemcovsky at the hotel to rest for a while as they pondered how they could help fulfil his wish to return to Czech.

When they returned, they surprised him with a one-way ticket leaving from JFK Airport early the next morning.

Told Levithan: ‘I can only imagine being on the street, alone in a different country where nobody speaks the language. We just wanted to get him home with his family,’

Levithan said they got him on the flight around eight hours after they first met him, desperate and alone, in Union Square.

He went on to tell that he and the group are looking forward to hearing from him once he’s settled back home, adding that they exchanged contact information.

But for now, Levithan tells they are just happy at the difference they were able to make in helping a complete stranger who was down on his luck, and hope their selfless actions inspire others to assist those less fortunate.

‘It’s the holiday season. We were there to do good. Giving shirts and warming people is really nice deed. Giving him a fresh start and getting him where he needs to be — that’s what motivated us to go through with this,’ said Levithan. ‘I think I got more out of it than I thought I would.’ 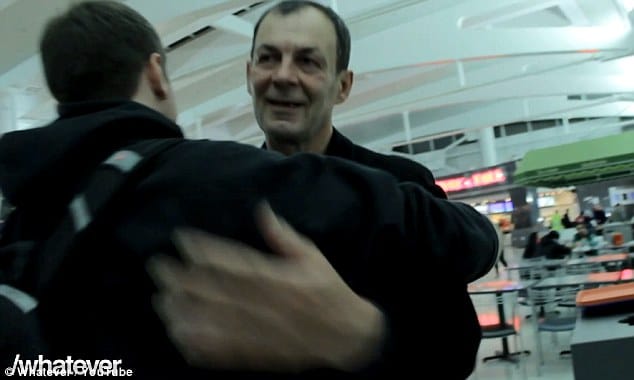