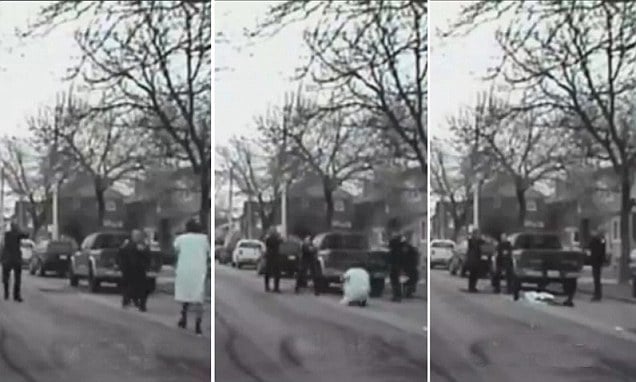 What to think, what to say? Cops have shot dead a mental patient, Michael Eligon as he wielded scissors because the officer armed with a Taser gun had yet to arrive at the scene.

The incident came to happen in Toronto, Canada last year on February 3 and for the first time the video of the incident has since been released during an inquest.

At the time cops had demanded that Eligon who was approaching cops with a ‘blank stare’ drop his weapon but with the mental patient not responding officers went on to shoot the man three times at point blank, killing him instantly.

Under cross examination, Constable Scott Walker told the inquest that a Taser would have been a lest lethal option of subduing Eligon but that the sergeant carrying one was not on the scene at the time.

Michael Eligon told cops had escaped from Toronto East General Hospital, where he was being treated for depression, earlier that day wearing just socks and his hospital gown.

The Toronto Star reports Eligon suffered from depression with psychotic features — symptoms that intensified just before his death.

“He felt like the walls were closing in on him,” Monique Garrow, his former case worker at St. Joseph’s Hospital, told the inquiry.

“He was troubled. He was paranoid. He kept wondering why people are doing this to him.”

The police hunt for Mr Eligon began after he stole two pairs of scissors from a convenience store, stabbing the attendant in the hand as he tried to stop the escapee.

Michael Eligon then tried to steal car keys off two different women but was scared away and took shelter in residential backyards.

A total of 10 police officers finally converged on Eligon, surrounding him with with guns drawn.

In the footage, captured by a police car’s dashboard camera, cops are heard yelling ‘drop it’ as Michael Eligon walks toward them and as Const. Walker testified, appeared ‘out of touch with reality.’

Told Const. Walker: ‘I remember looking into his eyes.

‘He seemed disoriented, he seemed as though he had lost touch with reality and he had a blank stare.’

Unperturbed, Michael Eligon continues towards police, who back away until one officer backs into a parked car.

As Michael Eligon advances to within four to six feet of the policemen, Constable Andrew Boyd screamed ‘shoot him’ and one officer obliges, firing three shots. From there Michael Eligon is seen crumpling to the ground, deceased.

Const. Boyd told the inquest on Wednesday that the police’s actions were justifiable as their lives were in danger.

Told Const. Boyd : ‘Mr Eligon could have lunged forward in a fraction of a second.’

That said Const. Boyd did go on to admit that he himself was not inclined to pull the trigger. Whilst he had a clear shot himself, he chose not to pull the trigger. In his memo book, he blamed his inaction on worries about hitting someone else. “Really,” he confessed, “it’s extremely difficult to take another person’s life.”

The officer who pulled the trigger has been cleared by the Special Investigations Unit (SIU) but is expected to testify next week. He had been on the force just nine months.

That some said have also come to wonder why cops hadn’t fired at less lethal regions on the man’s body or why for that matter they hadn’t sought to simply contain the man until a Taser arrived?

The incident is once again challenging the way police officers go about installing law and order in precarious situations with many wondering if officers are simply too overzealous in their application of law and order?

Police witnesses were asked why they didn’t use Eligon’s name to try and reach the ill man rather than continually shouting at him. Boyd angrily scoffed at what he regarded ‘quarterback’ suggestions.

“I couldn’t even remember my own name at the time,” he said of those stressful minutes. “This is a situation where a guy’s coming at you with scissors trying to kill you and you’re trying to create rapport?

“No. This is not a situation where you can have a nice leisurely chat,” Boyd insisted. “We’re not psychiatrists.”

An assertion that this many on the web find contemptuous and impossible to imagine given the degree of training that police officers actually do receive.

The inquest is also investigating two other fatal police shootings of mental patients.

One must remember the cops can cover up and change what exactly happened. That’s why I say to all society if you see police arresting someone get your camera rolling. We need to catch all those corrupt cops in the act.

What you and everyone else on here fail to realize is that NO amount of training will remove the danger from the situation. It is made WORSE because the person is mentally ill. They are not predictable in their actions.. That makes the danger even greater..

come on, 10 cops and can’t hit a guy with something in the head to knock him out? they do get training about disarming people with guns and knifes, why shot to kill? that is the only thing that bothers me

Consider what the outcome would have been if someone had come out of their house to see what all the noise was about, and the man had stabbed them. Now we have at least eight officers responsible for the injury or death of an innocent person.