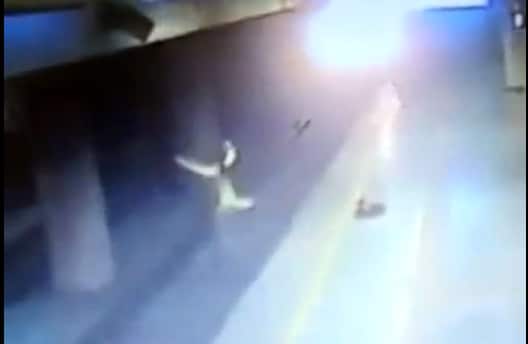 A suicidal Indian woman attempting to take her own life at a New Delhi subway station has survived unharmed. The incident is said to have taken place this past June along a deserted train platform.

The suicide attempt caught live on surveillance camera incredulously shows the woman patiently waiting for the train and then when aware of its oncoming suddenly leaps in front of it to her almost certain death. Except nothing happens to her.

As the video continues playing and one expects to the smashed body parts as the train moves past forward the viewer instead is met with the unbelievable visage of the Indian woman remarkably still alive, untouched and unharmed. With the train finally gone, the woman emerges…a bit shaken but without a scratch! She is eventually helped back up the platform with the aid of a station attendant.

Went on to tell a security official Udayan Banerjee:

“She came to the station alone apparently to commit suicide.”

“There have been 10 attempted suicides this year but this one was unique and miraculous. We don’t know how she survived.”

Though a Delhi Metro Rail Corporation spokesperson called the woman’s chances of survival “almost impossible,” other DMRC officials have theorized that a “ditch or depression” in the exact spot where the woman landed ultimately saved her life.

What though is  equally beguiling about the video are the voices of the station hands who are heard watching the unfolding scene to the horror there live in front of them. But what brings the absurd nature of the incident to light are the labored expressions of incredulity and surprise and then eventual laughter that the woman has survived. Of course that doesn’t mean you will next time you decide to take a flying leap into the abyss either….

Then there’s this too: The committee submitted its report to the DMRC on Saturday, following which two DMRC engineers were suspended.

A cantilever arm of one of the platforms, which supports the elevated platform, was found to be deflected during a routine inspection check on September 16. This had resulted in the sagging of a part of the platform.

Since then, only one of the platforms at the station is functional and the waiting time between trains has increased by 5 to 6 minutes.

The woman, who lived in a slum, was handed over to her father after the station manager reasoned with her. Indeed…