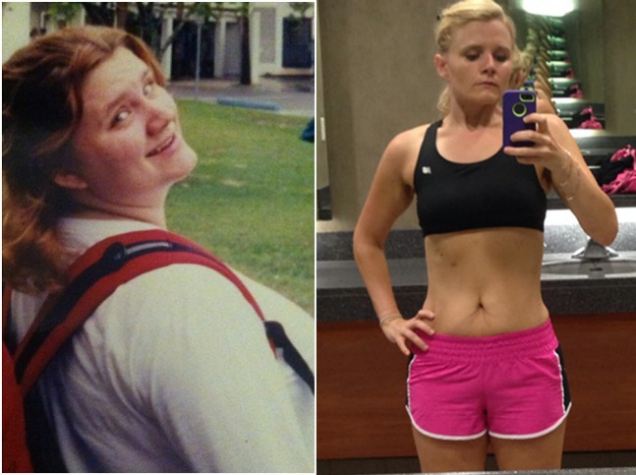 Victoria Elizabeth has gone on to document how she went on to lose weight after once failing to recognize herself after she caught a glimpse of herself in a photo.

In a feature with the UK’s dailymail, the now 29 year old woman describes how a rapid maturation during puberty combined with comfort eating to cope with bullying led to her weight-gain during high school.

Yet something went on to click with Victoria Elizabeth one day when the then 5ft 2′, 214 pound woman caught a glimpse of how she must have appeared to others:

‘I was horrified. I had no idea that I was wider than my overstuffed red bag,’

‘It was a hard reality to accept. This was not me,’

‘I was a bubbly, energetic person. How could such an enthusiastic person be buried inside someone so large?’

After skipping meals, with no avail, the then-16-year-old was enrolled in Navy Junior Reserves Officer Training Corps, which saw her running and doing calisthenics every morning.

‘I wish I could say I immediately turned to diet and exercise when I hit my first breaking point, but I certainly didn’t. At 16, I wasn’t sure what the right steps were. Initially, I tried skipping meals — all that did was spawn a binge at the end of the day. I tried buying diet pills, but quickly learned you have to be an adult to purchase them.’

Thankfully NJROT forced the young woman through her paces.

‘When 20 students depend on you to keep doing your pushups to avoid punishment, it’s amazing how much willpower you can find buried inside you.’

It wasn’t soon long before Victoria Elizabeth went on to shed she lost 44lbs by the end of high school, and a double shift as a waitress in college led her to shed even more weight.

Eventually Victoria manages to whittle her weight down to 134 pounds but even then found that an exercise fraught with peril, which she began to document on her own blog, Memoirs of a Yo-Yo Dieter.

‘The big thing I learned about nutrition is that it’s not something you can pick up and put down whenever you’d like. When I dieted, I would lose weight quickly — only to put it back on the second I reverted back to my original lifestyle,’

‘I struggle to still maintain my healthy weight and fitness patterns,’

Fortunately, I have more good days than bad as I have established fitness habits and a regimen that help keep me on track.’

The regimen involves a mostly Paleo diet – also known as the caveman diet – which sees her avoiding grains, beans and dairy.

Nevertheless Victoria Elizabeth tells the real key to her healthy lifestyle is the occasional indulgence.

‘I’m human, so I stick with my diet 90per cent of the time and will have the occasional cheat, such as a pumpkin spice latte at Starbucks or a few Reese’s peanut butter cups.

‘We always want what we can’t have,’ she explains, advising others: ‘Don’t restrict – improvise!’

Isn’t it time you also came clean about where the real you went as well…? 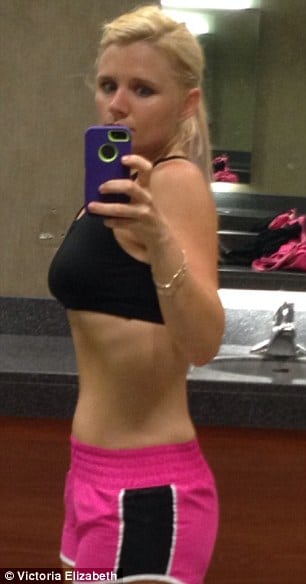