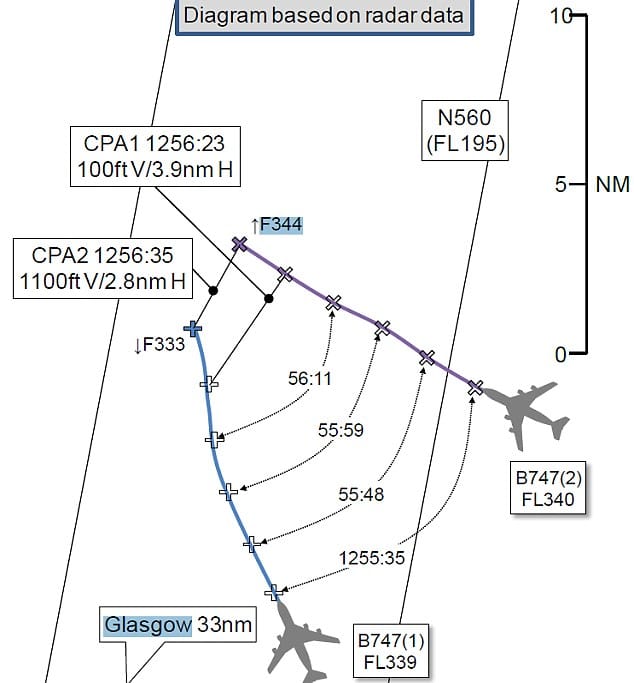 The incident is thought to have occurred as a result of the transatlantic Boeing 747’s erroneously converging side by side with each other for a distance of ten miles as crews prepared for their ocean crossings.

The UK’s telegraph goes on to note when the danger was first spotted the planes were ten miles apart, but within a minute they were less than three miles away from each other and still closing in and by then only 100 feet vertically apart from each other.

The tragedy is said to have only been averted in the final seconds, when the pilots on each aircraft physically saw each other and took evasive action, with one plane climbing, the other diving. Although one ponders what could have been if each respective pilot had chosen to react similarly…

Despite a lengthy investigation, experts are at a loss to explain how the crews of both aircraft either misheard or misinterpreted flight control orders.

The near-disaster occurred in broad daylight on June 23 at a position about 30 miles north of Glasgow.

Told a report via the UK Airpox Board:  “Had the pilots complied with these instructions, simulation indicated that separation would not have been lost.

“It was apparent that both crews had taken each others’ instructions, and the board found it hard to determine why this had occurred,”

“The board was surprised that all four pilots had misheard or misinterpreted the avoiding action instructions despite at least one of the crews reading them back correctly.”

The report concluded: “The pilots of the aircraft on converging tracks flew into conflict because, although they acknowledged timely avoiding action, they did not follow it.”

The board said that the danger to the aircraft was increased because they had earlier needlessly been ordered by air traffic control to fly at the same height – 34,000 ft.

No name of the airlines involved as of yet has been publicly released.

Commentators on the web have come to wonder why four pilots came to misunderstand the air controller and whether their instructions were at fault?