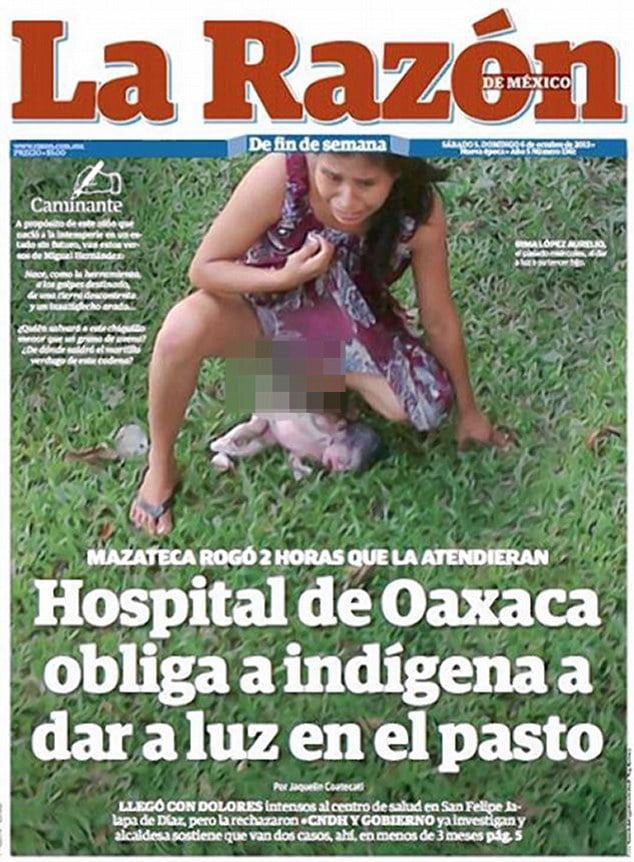 ### For those of you wishing to see the explicit shot of Mexican mother giving birth on the lawn go here. You have been warned, it’s gruesome.

A Mexican health director, Dr Adrian Cruz, has gone on to be suspended after a photo of an indigenous woman his clinic turned away giving birth on the lawn made the rounds.

The photo of the woman giving birth on a patch of grass outside the clinic has since gone on to spark a nation wide debate.

The photo taken by a passerby, Eloy Pacheco Lopez, shows 29-year-old Irma Lopez , who is of Mazatec ethnicity, squatting after giving birth, her face contorted in pain and her tiny newborn son still bound by the umbilical cord and lying on the ground.

The woman, a married mother of three, said that she and her husband, Pacheco López were turned away from the Rural Health Center of the village of San Felipe Jalapa de Diaz by a nurse who said she was only eight months pregnant and ‘still not ready’ to deliver, even though the woman was reportedly fully dilated.

The couple, who are Mazatecs and do not speak Spanish, could not understand much of what the nurse was telling them beyond the word ‘no,’ so they went outside.

Addressing the controversy later, the UK’s dailymail goes on to note the nurses blamed the incident on the language barrier and claimed that they did not have enough staff on hand to treat the woman due to a partial work stoppage.

An hour and a half later, at 7.30am, the woman’s water broke. Knowing that the time has come, Lopez kneeled on the grass outside the clinic and started pushing while grabbing the wall of a house.

Told Irma Lopez, who was alone for her birth whilst her husband sought help:

‘I didn’t want to deliver like this. It was so ugly and with so much pain,’

After a passerby went on to take the photo and give it to a journal, the photo began to run in several national newspapers (naturally), including the full front page of the tabloid La Razon de Mexico, as well as being widely circulated on the Internet.

The case has since ignited debate about the shortcomings of maternal care in Mexico, where hundreds of women still die during or right after pregnancy. It also pointed to still persistent discrimination against Mexico’s indigenous people persists.

‘The photo is giving visibility to a wider structural problem that occurs within indigenous communities: Women are not receiving proper care. They are not being offered quality health services, not even a humane treatment,’ said Mayra Morales, Oaxaca’s representative for the national Network for Sexual and Reproductive Rights.

Silvia Flores, the mayor of the town where the medical center is located, told  Clarin that it was the second time in a year that a woman in labor has given birth on the lawn: in July, another indigenous woman delivered a baby on the same grass patch.

The Mexican federal Health Department has since sent staff to investigate what happened at the Rural Health Center of the village of San Felipe Jalapa de Diaz.

Nearly one in five women in the state of Oaxaca gave birth in a place that is not a hospital or a clinic in 2011, according to Mexico’s census.

Health officials have urged women to go to clinics to deliver their babies, but many women say the operating hours of the rural centers are limited and staffs small. Which might also say a lot about the attitudes and incentives towards poorer discriminated classes…