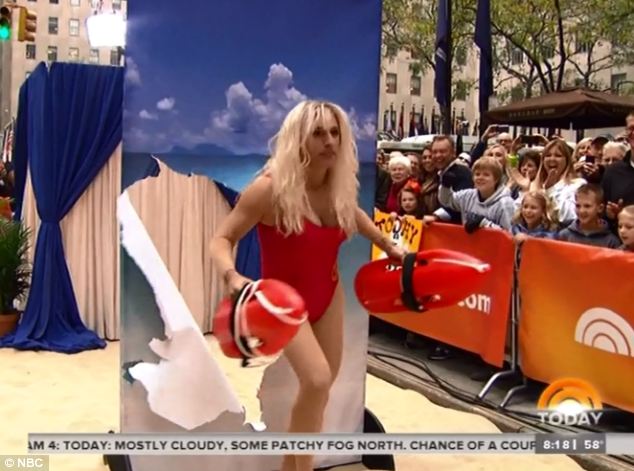 The horror kids of Gotham City were this morning treated to the kinky tricks of NBC‘s Matt Lauer‘s side profession, that of a former washed up blonde gollywog prancing around Columbus Circle. And to be sure the goblets loved it, but of course not nearly as much as our action hero Matt Lauer.

In lieu of America’s fanatical celebration of the macabre and the kinky, NBC’s The Today show and ABC‘s Good Morning America raced to prove who could be the more ridiculous and deserving of your partisan viewership.

That’s right Matt, the crowd will always love you when you show the real you and park your perfect tea cup manners to the side.

Tells huffpo: The theme was classic television shows. Al was Mr. T, Kathie Lee and Hoda were dressed up as Wilma and Betty from “The Flintstones,” Savannah and Natalie were Laverne and Shirley, Carson Daly was Jon from “CHiPs” and Willie Geist was David Hasselhoff.

But the pièce de résistance was Matt’s big reveal and his re-enactment of Pamela Anderson running in slow motion.

Because Matt Lauer is the kinky hawt bixch we all knew he is and finally came out to show it.

Would you hit it? Does a teabag come up with a silver spoon….?