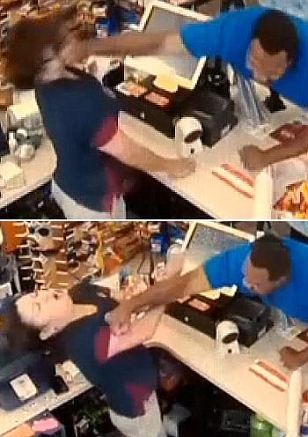 A man has gone on to punch a female store clerk in the face over 41 cents after being told he did not have enough money to buy a cigar.

The man it is said was trying to pay for a $1.41 cigar at a Lakewood, CA., Conoco gas station earlier this month with  a $1 bill when he became enraged after being told he needed another 41 cents, leading him to strike the 23-year-old attending clerk in the face.

Identified under the pseudonym ‘Yadira,’ the female store clerk fought back tears as she told KCBS of the incident.

‘There’s cowards out there willing to do stupid stuff,’

Explaining that he tried to short-change her by 41 cents while buying a Swisher Sweets cigar, Yadira told that he said ‘this is all I have… b***h whatever.’

Yadira then asked the man to leave the store before he attempted to snatch the cigar from her.

‘It just happened so fast… I didn’t think he was going to hit me, [then] he just socks me.’

Security footage of the incident shows the man trying to grab the cigar from the female store clerk before leaning forward, then winding up and striking her in the face.

Perhaps shocked by what they had just seen (do you think?), customers in line behind the man stood still as he proceeded to then storm out of the store.

Went on to tell a police spokesperson: ‘It’s a brutal attack on an innocent victim.’

The punch threw her glasses off her face and injured her eye, but she was otherwise okay. She finished her shift that night, but told KCBS she is afraid when she goes to work.

‘Really? Over 41 cents? Imagine if he got like that, imagine what else would have happened?’

To date police still have yet to find the suspect and are asking for the public’s help identifying him. Tellingly commentators on the web have gone on to point out the race of the man and the woman and have wondered out aloud if that may have affected the reason why the crime has yet to be resolved.