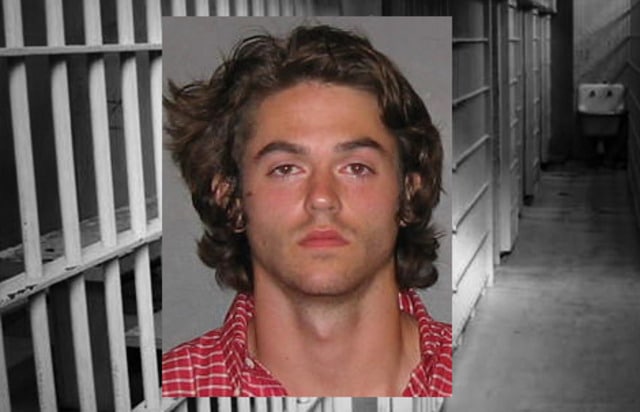 Grand Theft Auto fan, Zachary Burgess has been arrested after his ass decided to see what it would be like to play the much ballyhooed video game in real life.

As part of his efforts to mimic the video game, Zachary Burgess, a 20 year old college lacrosse player, this past Saturday night, circa 2.30 am, purportedly stole a truck, kidnapped a woman and smashed into nine cars before telling a police officer he had done so because he wanted to see ‘what it was really like to play the video game Grand Theft Auto.’

According to police reports, Zachary Burgess initially made off with a truck after its owner left it running in a bar parking lot with a woman inside.

Burgess allegedly jumped into the driver’s seat and tried to speed from the parking lot. But he faced a problem – other parked cars in his way.

Told Cpl. Don Coppola of the Baton Rouge Police Department who attended the smack them up bonanza: ‘When he tried to flee the parking lot there were several cars blocking the way.’

‘He began ramming into the parked cars.’

Burgess, an Auburn freshman from Hoover, Alabama, allegedly would go on to strike nine vehicles in total. Touch down bixch!

Went on to tell Cpl. Don Coppola: “We responded to numerous reports of hit-and-runs in the parking lot of a local bar,”

“The vehicle was found abandoned a few yards away from the scene and a group of witnesses were holding the suspect at the location when officers arrived.”

“He fled the scene of the accidents with no signs of him intending to return the truck to the rightful owner.”

Zachary Burgess’s was released Sunday after being able to post bond after bail was set at $80,000.