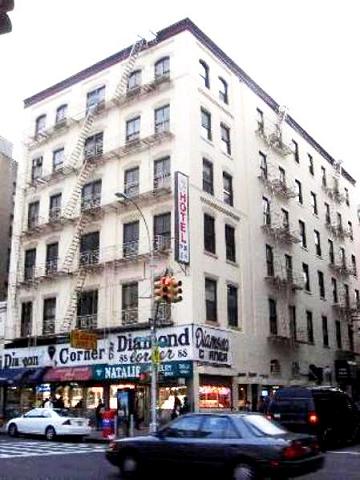 Getting by for some can be an exercise in pure hell. Case in point the Sun Bright Hotel in NYC where patrons (for a lack of a better word) pay up to $10 a night for the privilege of living in cell like structures made out of chicken wire amongst a cluster fuck of other chicken wire cell dwellers.

The nypost who this weekend has done a feature on the single room occupancy hotel attests that the hotel has been a continual hodge podge of city dwelling violations that never seem to ever get resolved and where sometimes rotting dead bodies can be left up to fifteen days at the dwelling before management finally gets round to tending to the inconvenient matter.

Tells one resident David Rodriguez, 74 who has lived in one of the cages (can you imagine?) for 16 years:

“Somebody died on the other side, and he was there about 15 days.

“They left it dirty. It smelled very bad — a dead man!”

The post goes on to report that the hotel nestles on the third and fourth floors of a building on the corner of Bowery and Elizabeth streets where up to 100 occupants (men only) on each floor live huddled in 7 by 5 feet cages.

The feature goes on to tell how each floor goes on to offer only one bathroom with two shower stalls, four toilets and one urinal.

Tells one dweller, John Arkue, a disabled construction worker who has lived on the third floor for 15 years:

“I called the inspector a couple of times to come and check it. They don’t do nothing.”

Since 1988, the city Department of Buildings has slapped the Sun Bright Hotel with 46 summonses. To date the venue has 22 open violations, nearly all issued in 2011, for converting the second and fifth floors into a hostel and for installing laundry equipment on the second floor.

In 2012, a tipster told the DOB that 12 people were crammed into a single hostel room. Two responding inspectors were denied access. A third found no violation.

A Post reporter observed about 125 rooms on both the third and fourth floors. The certificate of occupancy indicates only 83 are permitted per floor.

As an aside this scoundrel once had the miserable experience of once entering a similar style occupancy on Williamsburg’s Broadway where he came similar over crowding, rampant open drug use and a hodge podge of tenants murmuring inanities as if in self delusion. Which is to suggest such residencies have become a kind of dwelling of last resort for the disenfranchised of society, the afflicted and the mentally challenged.

That said the post goes on to note that most of the occupants of the Sun Bright Hotel happen to be Chinese workers who are forced to live in the cramped quarters as they attempt to make way on their meager earnings, presumably because they are illegally there.

Amongst some of the smells countered by the nypost reporter was hallways reeking of urine, rotting trash and urine. During his visit at the Williamsburgh single room occupancy other smells this scoundrel was able to detect included faeces, crack cocaine and perpetual chain smoking of cigarettes.

The residencies are also prone to violence given the exacerbating conditions which sometimes leads to hostilities amongst residencies.

An aluminum baseball bat, he said, is his only protection.

“There’s a whole bunch of nuts around here,”

What do you think kids, do you smell something rotten at city hall?