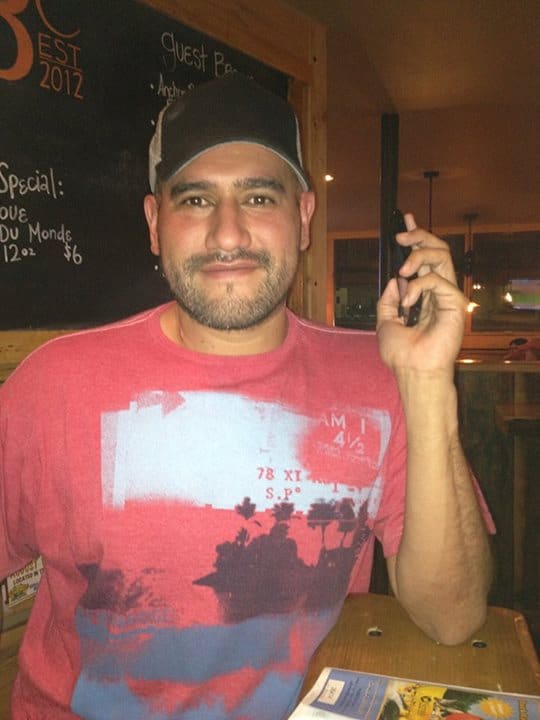 A Nevada restaurant has won revenge against one of its recent patrons, Saul Zelaznog who it said came and ate and never returned to pay his outstanding bill after promising to do so.

Not happy with filing a police report against Saul Zelaznog, The Brewer’s Cabinet decided to take the extra step of posting his image on facebook in an attempt to shame him and to warn other local businesses in the tightly knit community of Saul’s devious practices.

From there it wasn’t long before the post went viral gathering hundreds of shares and likes, with at least three other local restaurants confirming that Saul owed them money.

If you know, or see, this dude, please call RENO POLICE DEPT at 334-2121 immediately, and then remind him that his tab at The Brewer’s Cabinet is still waiting to be paid…. and his tab at Campo…. and his tab at Imperial…. and his tab at Chapel… and his tab at many other fine establishments. And, while you’re at it, you could tell him that visiting restaurants/bars with your friends, running up a huge bill, roughing up servers and then bailing is pretty uncool… pathetic, really. Get a life, man.

It would eventually be disclosed courtesy of other local restaurants that Saul Zelaznog had used the same technique each time in getting away with having to pay his bill. He would order and eat his food, and once the check arrived, he would claim that he didn’t have or had forgotten his wallet.

In his defense Saul would go on to tell local media the following: “They’re acting like I ran out of there. I was going go back to take care of my tab. I’m not trying to burn bridges around town. This is a small town.”

“People who are trying to stick it to the man or whatever they’re trying to do, they’re hurting everyone by leaving without paying.”

Not long after the first Facebook post went up, Zelaznog was arrested and jailed for violating his parole. The Brewer’s Cabinet commented on the arrest on their Facebook page: “We hope that all of [Zelaznog’s] outstanding debts are paid in time, but more importantly, that he makes wiser decisions in the future.”

And then there were these comment on the web that made me wonder as well:

I think that you overestimate the response of police to petty crime and underestimate the power of public humiliation in a small town.

Wow, I am amazed at some of the comments. This guy steals and some people think they have an angle where he can make money.

In our society honor used to be something that was valued but many of us are truly becoming animals, with my apologies to animals, with a mentality of I will take whatever I can get, right or wrong and morals be damned.

I have started to figure out that in our society, many, if not most, people consider getting caught the problem, not the stealing. I know it has always been that way with a certain number of people but it seems that it is spreading to more and more people in our society like a virus.

I have seen several interviews lately when it comes to stealing by younger people and when asked questions to the effect of, “did you not understand what you were doing was wrong?” and the answers have been roughly, “I should have known better, I knew there was a chance I might get caught.”

They are not even understanding the question, basically the response is, “I have learned my lesson, I should only steal when I know there is no chance of getting caught.”

I also have personal stories as a small business owner. I usually only employ younger people and when I catch someone stealing I ask them how could they steal from someone that trusted them with a job and the response is usually, “I needed the money” or “I did not think you would miss it” or “you do not pay me enough”, etc. The narcissism is amazing and its like the morals have absolutely no relevance in the matter. And these are college educated people that come from what appear to be good families.