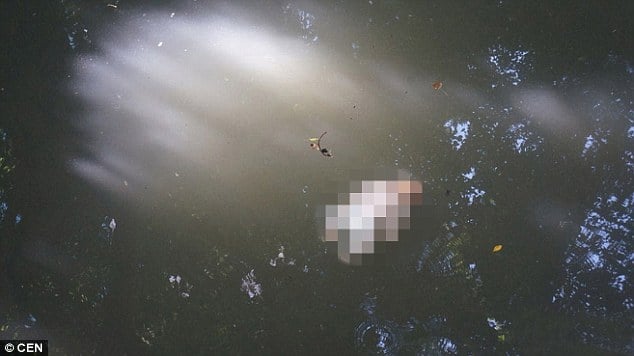 A picture of a newborn baby drowned in a river has gone on to cause furore in China after the image ended up being posted on social media.

The picture, said to have been taken from a river bank in South East China goes on to show a dead infant wearing a romper suit and a nappy days several days after it had been abandoned in the water.

The UK’s dailymail goes on to report the image has led to web users now searching for clues in the hope of identifying the child’s identity.

Told one web commentator: ‘Abandoning babies is not new but most people do it at a place where the child will have a choice of a new life,’

‘Dumping a baby in a river to die is inhuman.’

It is believed the child’s death may have come about because of the often held aspiration that new born sons will one day be in the position to take care of the parents once they reach old age. It is widely believed the gender of the drowned child was that of a female.

The death may also be augured by China’s one baby policy which was introduced in 1979 to keep a cap on the country’s population, which serves to restrict urban couples in having just one child.

With ultrasounds often forbidden in China, for fear that couples may choose to abort their baby if they come to discover that its gender is not the much preferred male gender, it is thought that the discovered child may have been abandoned once its gender at birth became apparent.

Paradoxically the mindset has led to a higher percentage of males to females ratio in China which has now made it harder for males to marry and produce off spring as they compete for the limited pool of females on a per capita basis.

According to recent study it is now expected that approximately 30 million more men than women will reach adulthood and enter China’s mating market by 2020.