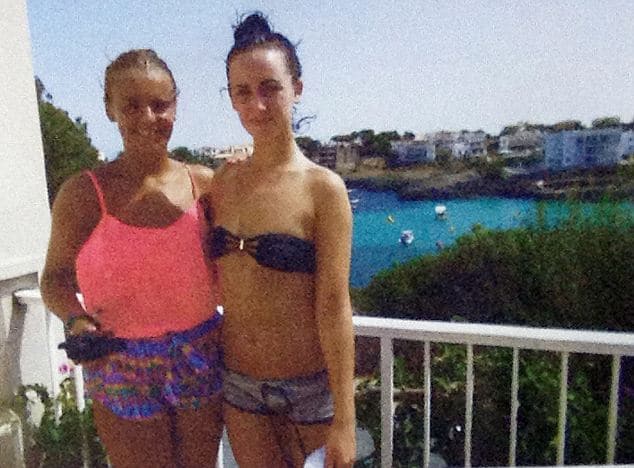 British drug mules Melissa Reid and Michaella McCollum Connolly, both 20, are said to have stood in front of court today on charges of trafficking cocaine to the tune of $2.3 million dollars.

Looking glum and holding hands, the pair stood in front of a judge, in Lima, Peru where they were told that their fate would be decided within the next 24 hours.

After their hour long wait and in lieu of consideration for bail, the judge went on to remand the pair in custody whilst they considered the pair’s punishment.

During the hearing, the judge went on to ask the pair who they were asked to carry the drugs for, which they had earlier told they had done so only because they were made to do so at gunpoint.

The judge then went on to ask if that being the case, why the pair did not seek police intervention.

If found guilty it’s thought the pair may receive sentencing of up to 15- 18 years.

Since the women’s arrest, lawyers for the pair have gone on to express concern for their client’s mental well being.

Told lawyer Peter Madden to the UK’s dailymail: ‘They are in a horrific situation, in a dirty and cramped cell.

‘They have no bedding and they have not been given any food. I have asked for them to be given mattresses or I will go and buy some.

‘Their mood has changed. They are both very shaken and upset.’

It is thought in the event the pair are denied their bail application they may end up languishing in jail for up to three years before trial.

The women have gone on to claim they were kidnapped in Ibiza and forced to smuggle drugs by gun-toting Colombian gangsters – a story police have described as ‘illogical’.

Police chief Colonel Tito Perez went on to tell: ‘It is now up to state prosecutors to decide whether they formally accuse them of a crime based on the results of our investigation. Melissa and Michaella are still protesting their innocence.’

Confounding the purported drug mule’s story of having been forced at gunpoint to smuggle the drugs are the recent emergence of photographs which go on to show the pair posing on a balcony and on a beach with glasses of beer, days before their arrest at Lima airport.

The pair went on to tell that they were told to take photos of themselves at tourist spots to make it look like they were friends traveling together.

Since news of the pair’s arrests, assertions have been made that one of the girls was in debt to a drug dealer.

Refuted Michaella Connolly’s lawyer, Peter Madden: ‘Michaella Connolly did not owe any money to any drugs dealer, she was not and is not involved in the drugs trade, she has no criminal record, she has never been in trouble with the police in her life,’

‘She was not out shopping in Lima and spending a lot of money, that didn’t happen.’

It is understood the women in the interim are being kept in harsh conditions. Of course how harsh conditions may end up getting if the pair are denied bail is yet to be seen.