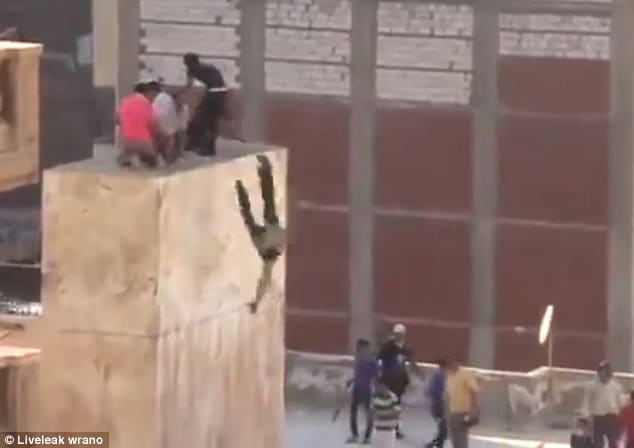 Local media in Egypt has reported that an Islamist mob threw two teenage boys off an apartment ledge before beating them. In the ensuing beating one of the boys, 19 year old Hamada Badr was killed whilst the other boy survived.

The fracas came after a pro Morsi mob came across four teens celebrating the recent ouster of Egyptian leader Muhammad Morsi. Incensed the Islamist mob began giving chase to the boys which led to them climbing the roof of an apartment complex and from there another 20 ft ledge where they sought refuge.

From there the mob began throwing rocks and large objects at the boys as they lay huddled on the structure. Perhaps out of coincidence one of the members of the mob is then seen robustly waving an Al Qaeda banner.

From there members of the mob were able to assail the structure where the four boys were, throwing two of them over before then proceeding to mercilessly beat the unconscious boys.

Told the father, Mohammed Badr of the one boy that died:

‘All he was guilty of was that he was on the roof of the building, celebrating the ousting of Morsi. But the Brotherhood waged a war against whoever was celebrating Morsi’s departure.

‘After throwing him, they wanted to do the same with the others, but people in the neighbourhood stopped them.’

Perhaps unbeknownst to the mob, an onlooker had been filming the ensuing fracas which they soon began circulating online. From there a Facebook group run by an opposition group called the ‘Six April Students,‘ posted a picture of the deceased asserting ‘Muslim Brotherhood and other terroristic groups’ for his death.

Alexandria, the locale where the fracas is said to have occurred has seen some of the most vigilant protests during the recent political unrest in Egypt of late.

Local media have gone on to tell that on the day of the filming of the video, twelve individuals were killed in clashes in the vicinity along with 200 injured.

At present there is no sight as to when the violence will dissipitate and whether the forcing of President Morsi from office will do much to quell the civil unrest as political factions seek to regain control of a political vacuum.