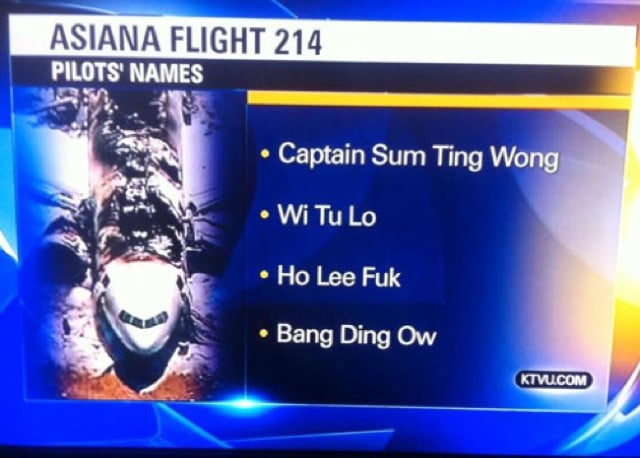 The National Transportation Safety Board (NTSB) has been forced to issue an apology following the release of four fake Asiana pilot names associated with last weeks Asiana crash to Bay Area TV station KTVU. The blunder needless to say has cast aspersion as to the average prevailing American attitude towards Asians, and to be sure it is not necessarily a very pleasant one.

The blunder included the releasing of the following names which could only be called conspicuous tampering but to the untrained eye could possibly be legitimate. Or could it?

The National Transportation Safety Board apologizes for inaccurate and offensive names that were mistakenly confirmed as those of the pilots of Asiana flight 214, which crashed at San Francisco International Airport on July 6.

Earlier today, in response to an inquiry from a media outlet, a summer intern acted outside the scope of his authority when he erroneously confirmed the names of the flight crew on the aircraft.

The NTSB does not release or confirm the names of crewmembers or people involved in transportation accidents to the media. We work hard to ensure that only appropriate factual information regarding an investigation is released and deeply regret today’s incident.

Appropriate actions will be taken to ensure that such a serious error is not repeated.
Summer intern? Of course what about the presiding editor? And even more incredulously what about the folk over at KTVU, didn’t they have an inkling that something was amiss?

One can only wonder about the state of the nation’s prevailing disparaging attitude towards Asian culture and their near naivety in appreciating nuance and specifics pertaining to a robust part of the world.

Cause racism is as rampant as you are willing to ignore it…so much for responsible journalism and a tainted media.