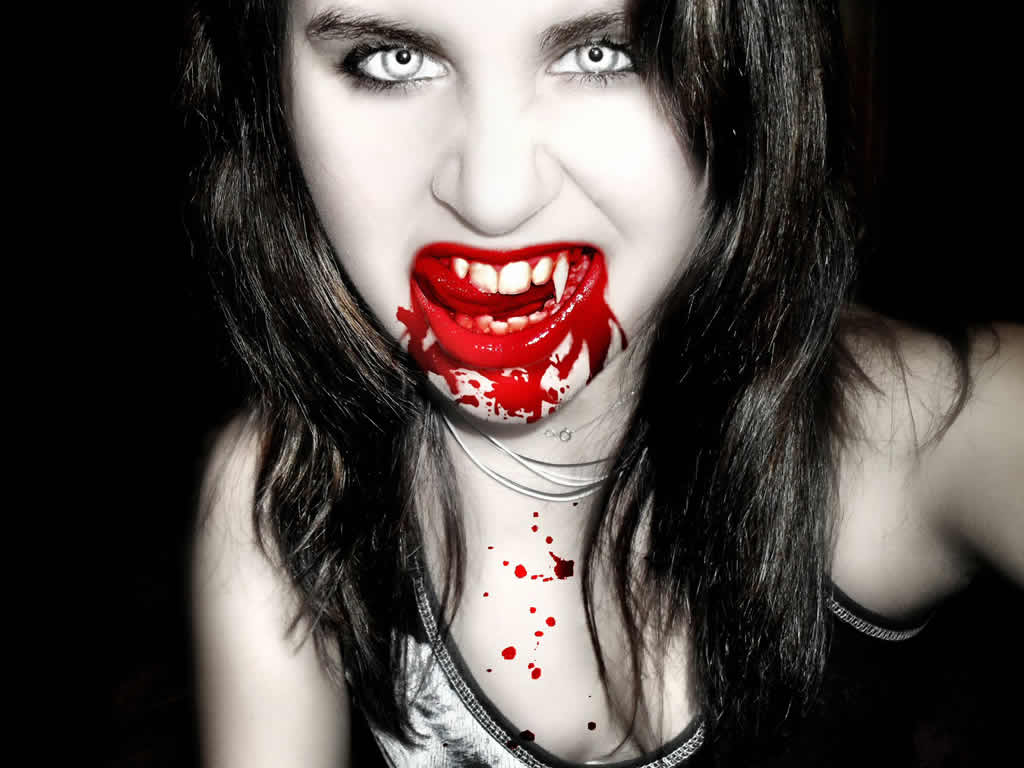 Making news is the interesting visage of Julia Caples, 45 who in her own words has spent the last 30 years drinking human blood from willing donors.

Insists Julia Caples who at times consumes as much as up to a half a gallon of blood a month, it’s the reason why she feels so young and vigorous.

Explains the Wilkes Barre, Pennsylvania native: ‘When I feed off of a person and drink their blood I feel stronger and healthier,’ she says.
‘I know scientifically there’s not a lot nutrition in blood, but maybe there’s some value we haven’t discovered yet.

‘I feel more beautiful than any other time when I’m regularly drinking. I’m also extremely healthy with no major health problems, and I have an abundance of energy all the time.’

And in case you’re wondering where she finds blood donors from, Julia Caples tells she finds fellow vampires (naturally) at her local occult and oddities store.

The actual blood letting itself takes place at her home where she uses a custom made pagan sterilized knife where she cuts her donors.

Julia Caples goes on to explain her fascination with blood began as a young girl, during her first kiss as a teenager, when she got the urge to bite her sweetheart with disastrous consequences.

‘It was my natural instinct and I liked the taste. I just got an urge and can’t really explain it. It’s never gone away. Needless to say though, he never kissed me again.’

Although she maintained the habit as a teenager, it wasn’t until she met her ex husband, 49 year old Donald Lazarowicz that she really got into the habit. The two even went on to have a vampire themed wedding ceremony back in 2000 and were known for their many occult themed parties in and around NYC in the early 2000’s.

And what do Julia Caples’daughters, Ariel, 24 and Alexei, 9 think of their mother’s thirst for blood?

‘We have all these decorations at home like coffins and dolls. I’m starting to think she’s a vampire,’ Alexei says.

Adds Ariel: ‘I don’t agree with it. I think she runs a lot of health risks. I worry she might get a disease from someone through the blood.’

In an effort to thwart the dangers of blood contamination, Julia makes sure all her donors are tested before drinking from them (just in case you too were also having ideas kids…)

‘I meet some donors online but I absolutely have to meet them in person first, she says. ‘And they have to get blood tests to make sure that they’re not carrying any blood borne diseases like AIDS or HIV.’

Although most doctors warn against the practice, they suspect the practice has been ongoing in various cultures for thousands of years as a result of deficiencies in the body and that of course the recent trend for vampire themed tv series and films hasn’t hurt either…