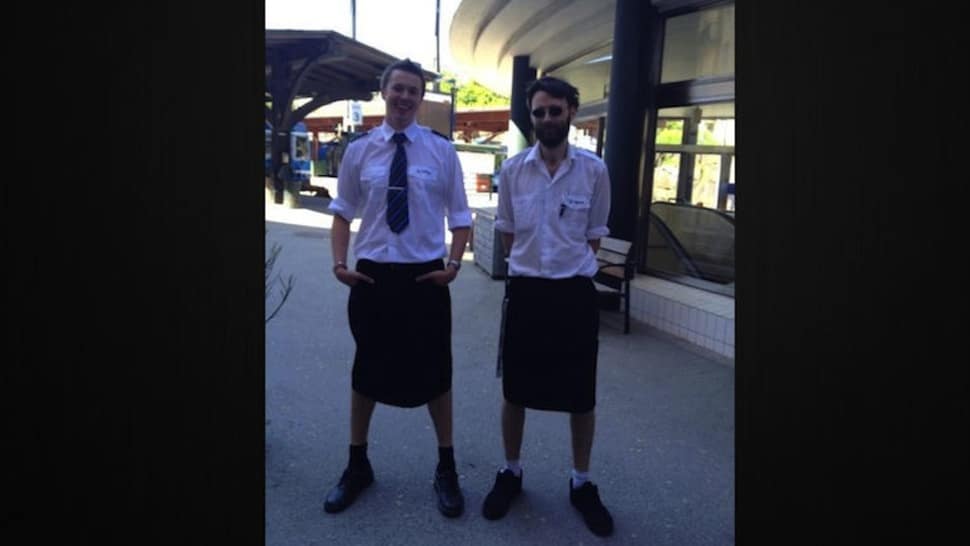 Try telling a Swedish fella that he can’t wear shorts to work and you’re likely to get a bizarre reaction but then again what’s a Swedish train driver to do stifling in the summer sun?

Male drivers on the Roslagsbanan line, north of Stockholm, have been wearing skirts to work for the past two weeks — and their employer, Arriva, is reportedly fine with it.

Arriva banned shorts from driver’s approved uniforms when it took over the line last year, and the new guidelines require employees to wear long trousers or skirts. So, in protest of the shorts ban, and in heat (train temperatures reach into the high 90’s), 13 male drivers began wearing the approved skirts to work.

“We have always said that when summer comes, we will get some skirts and wear them. It’s very warm weather here so we would like to wear shorts but if we can’t then we have skirts for comfort,” 30-year-old driver Martin Akersten told the BBC.

Adds Martin Akersten:  “The passengers stare at us but so far no-one has said anything – well, not to me, anyway. And I don’t mind as it’s more about comfort.”

The uniform regulations don’t specify gender, and the company doesn’t appear to care who wears what. I know I’m gushing from the gills too.

“Our thinking is that one should look decent and proper when representing Arriva and the present uniforms do that. If the man only wants [to wear] a skirt then that is OK,” Arriva communications manager Tomas Hedenius told Swedish newspaper Mitti. “To tell them to do something else would be discrimination.”

Akersten says customer response has been positive, but Arriva is reportedly holding a meeting in September to determine the future of the company’s uniform guidelines.

Beware of Swedish train drivers or else…