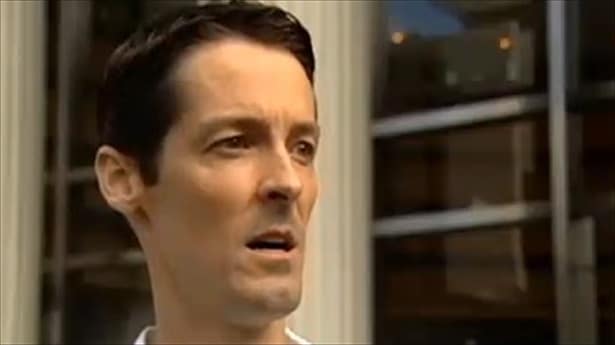 San Diego resident, Jeff Olson, 40 faces the potential of  spending up to 13 years in prison, all because he took to writing down his opinions on a public sidewalk in children’s chalk.

Pissed off with the Federal bailout of large banks like Bank of America, Jeff Olson decided that he wanted to share his thoughts with others when he chose to write the following epitaphs on local streets, “No Thanks, Big Banks” and “Shame on Bank of America” outside of three separate Bank of America branches in San Diego.

But after a bank security manager called the city repeatedly to complain about Olson’s washable messages, the city decided to charge him with 13 counts of vandalism, a misdemeanor. If found guilty however, each count could include a $1,000 fine as well as a year in prison.

While free speech is protected by the First Amendment, the judge for the case has barred the amendment being used as a defense by Olson, and says that the trial will only be about whether Olson is guilty of vandalism or not.

The mayor of San Diego, Bob Filner, sent a message to the city council president asking him to help close the case, calling it a waste of taxpayer money.

Told the mayor: “This young man is being persecuted for thirteen counts of vandalism stemming from an expression of political protest that involved washable children’s chalk on a City sidewalk.”

Concerned with media coverage surrounding Olson’s trail, the judge, Howard Shore, further curtailed Olson’s First amendment rights, and issued a gag order Thursday prohibiting him speaking to the media. Shore then went on to dismiss the notion that Olson would find himself with any serious jail time because of the chalk protest.

Closing arguments were made Friday and jurors are currently deliberating the case.

San Diego City Attorney Jan Goldsmith issued a statement saying in part, “We prosecute vandalism and theft cases regardless of who the perpetrator or victim might be. We don’t decide, for example, based upon whether we like or dislike banks.”

And then there was these reflection on the web that made me wonder as well:  If someone had written positive messages about Bank of America, would they have been charged with vandalism?

Defacing property counts as vandalism – you don’t have to damage it. I’m not sure how CA defines “defacing” though – had he used spray paint that would clearly be defacement. The temporary nature of the chalk may work in his favor. Regardless, this is a huge waste of resources.

So are you suggesting that graffiti of political nature should be immune from vandalism laws? What if I went to your children’s public school and write on the wall or sidewalk something like “Abortion is murder! Bush is should rot in jail!” What if I did that on your car, or on your lawn?

The law as it stands allow for your free speech (you can write what you want and not get in trouble for the content), but doesn’t immunize you from the crimes you commit while practicing free speech (e.g. graffiti, vandalism).