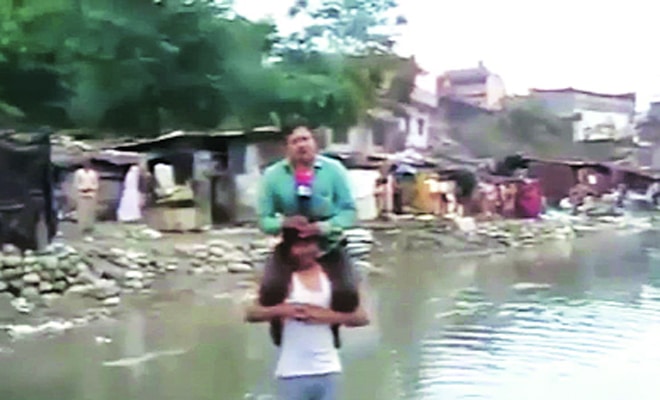 Veteran Indian TV reporter Narayan Pargaien has found himself shit out of luck after widespread condemnation of a video report where he told news of a recent flood outbreak whilst sitting on a victim’s shoulders led to his dismissal.

The massive floods which have hit Northern India have to date claimed the lives of 800 individuals.

In deciding to film a report of the damage, Pargaien went on to say a local man offered to show him around whilst sitting on top of the man’s shoulders.

Nevertheless Pargaien’s report would end up receiving wide flack after it was perceived that he was abusing his post as well as brazenly disrespecting the man who carried him during his report. Local media sources would go on to mock Pargaien for seemingly resisting the desire to get wet whilst making his report.

In his defense Pargaien told his critics that he had paid the local man 50 rupees.

Responded Pargaien: “I have received a lot of flack, as you know. But the intention wasn’t what the media has portrayed it to be. People are talking about us being inhuman and wrong but we were actually helping some of the victims there.”

Pargaien has since gone on to claim the criticism he has received has been unfair. “On the one hand what I did was journalistically wrong,” he went on to concede, “but how it’s being portrayed now … like a joke, doesn’t feel like it’s fair.”

From there Pargaien then went on amazingly blame the cameraman for how this all turned out:

“[T]he report was supposed to be telecast only with footage of me chest-up. This was entirely the cameraman’s fault, who, it seems, almost tried to sabotage my career by shooting from that distance and angle and releasing the video mocking this whole incident, and making me the villain. […] Releasing that video, with the intent of it being harmful to me, or mocking me, was wrong on his part. It could cost me my career.

But perhaps the most telling signs of self indictment of Pargaein’s faux pas comes in the following statement he soon made after the report which unabashedly underscores the impolite tension between the upper and lower classes that led to the reporter’s ultimate dismissal:

“His house was in a miserable condition and he had lost a lot in the flood, and was left with very little food and water,” Pargaien told local media site News Laundry. “We helped him with some food and some money and he was grateful to us and wanted to show me some respect, as it was the first time someone of my level had visited his house.”