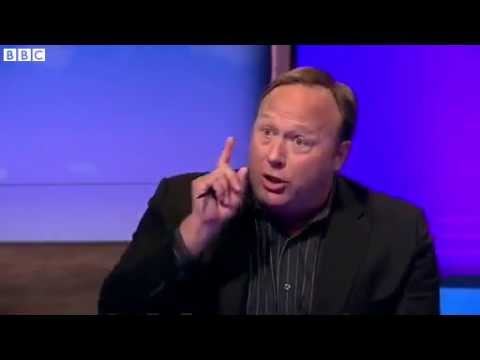 Freakshow of the Week: Conspiracy Theorist Alex Jones Goes on ‘The View’ to Talk Charlie Sheen

Kids it’s time to take the remote control and finely tune into the incredible antics of Infowars founder Alex Jones as he this morning took to some rather delicious spectacle on BBC’s Sunday Politics show as hosted by the BBC’s Andrew Neil.

There to discuss the goings on of the secretive Biderberg Conference currently playing out in world headquarters Alex Jones proceeded to deviate from the conversation at hand and started hurling discursives about the US government’s latest indictment on its citizens, the purported kidnapping of its citizens.

At first the good shit starts rather timidly with Andrew Neil attempting to put on a brave face as Alex Jones attempts to explain how the European Union and the Nazis are in cahoots to enforce a totalitarian dominion.

From there Alex Jones then turns his attention to fellow guest, journalist David Aaronovitch who by now is being drowned out by an increasingly agitated Alex Jones as Aaronovich goes on to challenge Jones.

By now it’s becoming increasingly obvious to both Neil and Aaronovich that Jones is on the good shit and about to self implode as they attempt to segue way into more meaningful territory. Of course Jones refuses to led the good camera boy to go away as he launches into a new discursive.

By now Neil has already told Jones to literally shut up a number of times, not that Jones has any intention of ever shutting up as he increasingly winds up into new revelations of world order conspiracies that he alone must reveal to the public at large whilst he still has a chance (Jones goes to tell how threats on his life have been made courtesy of the world order pact). By now one has a sneaking suspicion that Jones is there to plug his own agenda and material and not necessarily the topic at hand.

It isn’t until the video reaches the 4.40 mark that Alex Jones’ brain snaps a few synapses and he goes on to the following tirade:

Tells Jones: ‘Hey listen, I’m here to warn people, you keep telling me to shut up. This isn’t a game. Our government, the US, is building Fema (Federal Emergency Management Agency) camps.

‘We have an NDAA (National Defense Authorization Act) where they disappear people now. You have this arrest for public safety, life in prison. It’s basically off with their heads, disappear them.

‘You (Mr Jones) are the worst person I’ve ever interviewed. David (Aaronovitch), thank you for being with us. It’s gone half past 11. You’re watching the Sunday Politics.’

Neil then goes on to add: ‘We have an idiot on the programme today,’ before using hand gestures to indicate that Mr Jones had lost his mind, as Alan Jones continues to shout at him off camera, the good shit zinging back and forth in Jones’ collapsed brain synapses.

And then there was this acute observation courtesy of the UK’s telegraph that had me wondering as well:

The frustrating thing about Jones is that his clowning around makes it harder to take the questions he raises seriously. And some of those questions are important. We’re currently going through the biggest big government scandal since Watergate, with revelation after revelation of mass surveillance and political harassment. It’s actually not unreasonable to ask if government is out of control and whose interests it really serves. The problem is that Jones takes reasonable questions and provides bat sh*t crazy answers that then discredit the questions.

So why does he do it? Two theories. One, he’s in this for the money. According to Neil, as soon as the camera was off he reverted to a perfectly normal, non-ranty human being. What he does is a performance designed to get listeners for his tawdry show – notice that throughout the segment he keeps shouting out his website address.

Alternatively, perhaps Jones is actually part of the New World Order conspiracy? Maybe he gets his orders from the Queen of England and her partner in crime Bush/Soros/Ming the Merciless and the whole act is about making us laugh at something we ought to be scared of. Perhaps they’re all a bunch of lizards and they like to get together every Halloween to eat mice.

And there was comment on the web as well:

Alex Jones may be off his rocker but make no mistake, the political class would like nothing better than a global government set up like the EU.  We get to elect a talk shop, they get to make all the rules and regulations.  It’s already coming to that.  They get to control the food supply, the water supply, the financial sector, which companies get to be winners and even the flavour of politics allowed.  All through policy, amended treaties and red ink.