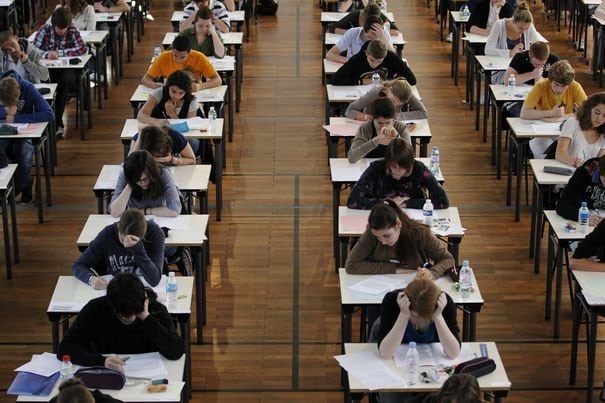 A French mother, simply identified as Caroline D has been questioned by authorities after she went on to disguise herself as her daughter in order to take an English exam in her place.

The 52 year old woman said to have donned Converse baseball boots, jeans and a lot of make up (naturally) managed to be admitted to an exam hall in the place of her 19 year old daughter.

The UK’s guardian goes on to report that the woman was able to pass through on account of the fact that the exam was not taking place at her daughter’s school where the attempt at deception would have otherwise been immediately noticed.

At the time the mother after passing hall monitors was able to take a seat, lay out her pens and begin to settle down and work on the three hour English composition exam which is part of France’s Baccalauréat.

But the plan was foiled when a monitor passed by the mother’s desk and happened to glance at the mother’s ID card and from there sought the advice of senior monitors after having remembered the girl’s real identity two days before when she had sat down and taken her philosophy exam.

Two hours into the exam, a monitor then returned to ask the mother to leave her desk and follow them outside the exam hall where plain clothes police were waiting.

Local press go on to tell that the woman was taken to a police station in Paris’s 10th arrondissement for questioning. It was not clear what sanctions the mother and daughter could now face, ranging from a fine to the daughter being barred from sitting exams for a period of years.

It is thought rising pressure to do well in the exams so as to afford a place at university and one presumes a chance to find a well paying white collar role in society has led to some taking dire chances.

The incident takes place as youth unemployment in Europe remains at a disturbing high stalemate.