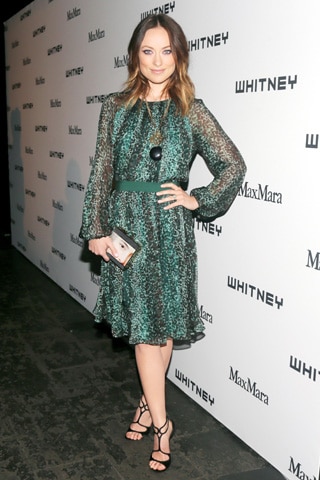 May 1, 2013 – New York, NY- Last Wednesday, more than 1,000 art lovers, celebrities, and supporters of the Whitney Museum of American Art attended the 2013 Whitney Art Party, hosted by the Whitney Contemporaries, the Museum’s dynamic group of young collectors and art enthusiasts. The event was sponsored by Max Mara atSkylight at Moynihan Station. This year’s Art Party raised more than $450,000 in funds towards the Whitney’s Independent Study Program and other education initiatives.

At one point this author had to wonder what registered for the real art as a number of guests pulled out all stops in flamboyant get up (yes you Andrej Pejic) but perhaps that was all in the spirit as the delicious canapes get flowing and the revelry continued until the early morning hours. Yes I danced on the dance floor too so there…

Gregory Johnston enjoyed cocktails by Belvedere and bubbles from Chandon. Highlighting the event were DJ sets by Harley Viera-Newton* and Brendan Fallis. This year, for the first time, the Art Party Auction was presented in partnership with Art.sy, which hosted a pre-sale preview that generated close to $70,000 in funds.

The Whitney Museum – Founded in 1930, the Whitney Museum of American Art is the world’s leading museum of twentieth-century and contemporary art of the United States. In addition to its landmark exhibitions, including the Whitney Biennial, the Museum is known internationally for events and educational programs of exceptional significance and as a center for research, scholarship, and conservation. While its vibrant roster of exhibitions and events continues uptown in the Museum’s current home at 945 Madison Avenue at 75th Street, the Whitney is in the process of constructing a new building, designed by Renzo Piano, in downtown Manhattan. Ground was broken in May 2011, and the Whitney’s new home is projected to open to the public in 2015. For further information, please visitwww.whitney.org.