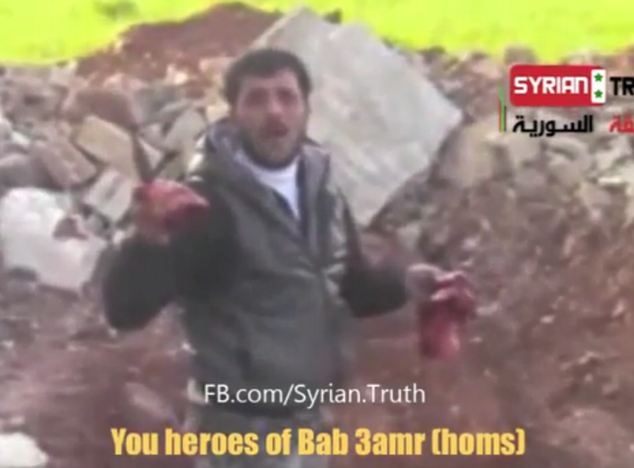 In one of the yet staunchest and damning videos said to be released with regards to the civil war currently raging in the Middle East nation of Syria, a Syrian rebel commander is seen cutting out the heart of a fallen government soldier and thus proceeding to eat it.

The video tells the entity is that of a well known Syrian rebel by the name of Abu Sakkar, a founder of the rebel Farouq Brigade. To date the video has led to have caused outrage of both supporters of President Bashar al-Assad and opposition figures.

Tells the rebel in the video:

‘I swear to God we will eat your hearts and your livers, you soldiers of Bashar the dog,’ the man says to offscreen cheers of his comrades shouting ‘Allahu akbar (God is great)’

The civil war said to have erupted in March of 2011 after initial peaceful protests were quelled by government forces. To date it has been reported a staggering 80 000 lives have been lost in the struggle.

The new video follows an earlier propaganda roost which saw the releasing of an image of a rebel soldier holding a government pilot’s decapitated head. It is believed like now, the releasing of said image was done with the intention to demoralize government initiative as the neither side is willing to to cede concessions. If anything the images are believed to have become part of the arsenal of warfare and retaliation as gridlock continues and the consumption of images is orchestrated to affect shock value.

Peter Bouckaert of Human Rights Watch has gone on to say that he had seen an original, unedited copy of the video and that Abu Sakkar’s identity had been confirmed by rebel sources in the province of Homs and by images of him in other videos wearing the same black jacket as in the latest clip and with the same rings on his fingers.

Tells Bouckaert: ‘The mutilation of the bodies of enemies is a war crime. But the even more serious issue is the very rapid descent into sectarian rhetoric and violence.’

Bouckaert goes on to offer that in the unedited version of the film, Abu Sakkar instructs his men to ‘slaughter the Alawites and take their hearts out to eat them’, before biting into the heart.

News agency Reuters has told that it cannot independently verify videos from Syria, where access is restricted by the government and security constraints.

Welcome to the new bitter warfare of public relations escalation and mutilation….