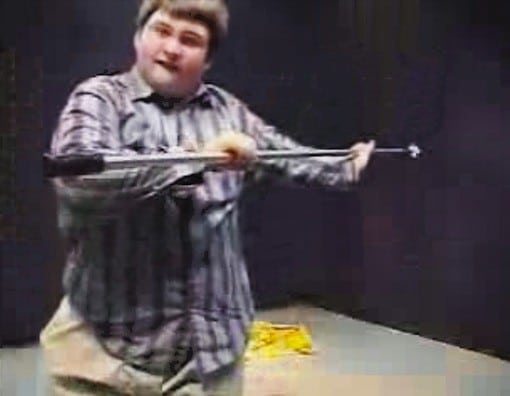 At the time, then 14 year old Star Wars kid Ghyslain Raza had no idea that an idle afternoon which had him awkwardly fooling around with a Star Wars light sabre (actually a golf ball retriever) would forever change his life.

He had also had no idea when a fellow school mate got round to posting a video of his antics on youtube a year later behind his back that he would also become an online target of many who would go on and demand that he kill himself.

The video would end up generating over a billion hits making the then young Ghyslain Raza a relentless target of cyber bullying. The results were disastrous. He ended up losing the few friends he already had, was forced to change schools before eventually settling into a deep depression (and submitting to a mental ward) which actually by now had him fluidly contemplating suicide. But somehow ten years later, the now journalist and prestigious Gill University law graduate has now gone on to break his silence to describe the whole episode to French Canadian journal Macleans  as a   ‘very dark period,’ in his life.

Via gawker who managed to catch an English traslation:

On how the whole thing started:

I made the video in November 2002, when I was a member of the school’s television club. I’d been working on a Star Wars parody with other students for a gala. One evening, while I was alone in the studio, I practised the choreography…Most 14-year-old boys would do something similar in that situation, maybe more graceful, but I was goofing around. I left the tape on a shelf in the studio. I didn’t think about hiding it. Who would take the trouble to watch it?

On the repercussions of his sudden fame:

Everything rapidly degenerated. In the common room, students climbed onto tabletops to insult me…People made fun of my physical appearance and my weight. I was labelled the “Star Wars Kid.” They didn’t mean it as a compliment. It soon became impossible for me to attend classes.

My Dad called the school, but the principal and the teachers didn’t understand. They were reluctant to get involved. So my father called the police. There was nothing that they could do. They advised us to get a lawyer.

The lawyers helped us to find a place where I could write my exams, so I wouldn’t fail. I did the exams in a high school affiliated with the psychiatric unit of a hospital because it was the only quiet place we could find.

Afterwards, we wanted to know: could we sue the media to force them to stop showing the video? What about suing the school, which failed in its responsibility to protect me? We settled on the idea that, by suing the few who had uploaded the video, we’d send a strong message.

The media’s story was that we were greedy…It was crazy! I can’t reveal the figures of the settlement, but none of us got rich. It didn’t even cover our expenses. The point was to send a message that the media would understand…That people should behave more responsibly.

Every single talk show in North America wanted me as a guest…But why were they inviting me? They wanted to turn me into a circus act. Having your 15 minutes of fame, when you’ve done something truly worthwhile, is one thing. When you earn it for something humiliating, that’s entirely different.

You have to learn how to overcome obstacles and keep going. You may only inch forward, but it’s important to keep moving ahead. The next year, I was ready to face normal life again. I switched schools.

On moving forward by looking back:

If what happened to me in 2003 were to happen again today, I can’t help but hope that things would different…I think that, today, schools feel more responsibility for what happens on the web.

Would I change the past, if I could? No. I wouldn’t change a thing, because today I’m happy with who I am…I’m the product of good and bad experiences. Obviously, if you were to tell me that it would happen again, I wouldn’t greet the news with overwhelming joy and happiness. But I wouldn’t look for ways to avoid it.

In the end  Ghyslain Raza somehow was able to survive the whole nasty ordeal, but that is not to say there are many out there who don’t and often take to taking their own life when things become too oppressive. Call it collective viral shaming or annihilation or just call it capitulation to one’s own inner demons or sense of shame. Granted perhaps Raza’s sense of shame may have been exacerbated by the fact that he was a nerd in class or perceived as such and whether we like it or not being deemed a nerd never extends too much sex appeal. Never mind if you’re a struggling 14 year old boy overweight and vexed with the onset of puberty and the unwarranted attention that he suddenly received at the hands of a faceless collective keen to make him their stick boy.

Which raises the question why is it always easier to shame others in anonymity than to accept ones own frailties and awkwardness? Perhaps really that is what the web was reacting to in the first place but rather than look inwards it looked outwards and found the easy target of an awkward boy who was just too easy to turn into a circus act. Not that us gossip writers aren’t guilty of turning the occasional celebrity into a rude poster boy, but then again one also has to wonder at some point one deserves privacy and anonymity from the web, especially if you’re an awkward 14 year old boy simply minding his own business…

Appalled by the slew of suicides as a result of cyber bullying Raza in the end offers the following:

“You’ll survive. You’ll get through it. And you’re not alone. You are surrounded by people who love you.”