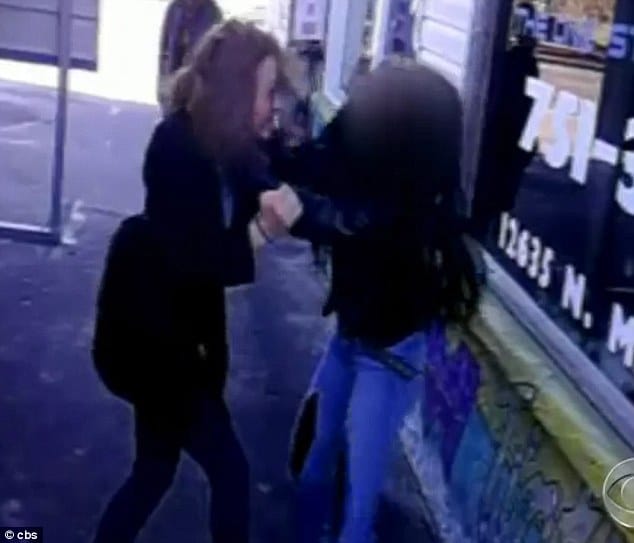 A judge has gone on to ban a 14 year old girl from attending every school in the entire county of Duval in Jacksonville,Florida after she filmed herself beating up a fellow pupil.

Told Florida circuit Judge Henry Davis: ‘This child is a threat to all of the children at any school. The injunction is a permanent injunction barring this child from returning to any public school in Duval County.’

Offered the girl to CBS: ‘I tried to walk away. I didn’t even know it was coming.’

Mobile phone footage of the assault shows Arial Jewett being beaten by the un named schoolgirl who slams her head into a stone wall while around 30 other teenagers watch.

“She had everyone else videotape it,” Jewett said. “She had the girl bring me over there. She probably had this planned.”

Arial Jewett continued: ‘She had everyone else videotape it. She had the girl bring me over there. She probably had this planned.’

Yet perhaps most bizarrely Jewett went on to revel that her attacker has a history of videotaping assaults and that she had already seen 5 of them, some of which had taken place within the school.

Nevertheless some are calling the judge’s sentence as to onerous with the school’s district superintendent Nikolai Vitti going on to say that banning Jewett’s attacker was a case of making her a scapegoat.

Told a lawyer for Jewett’s attacker: ‘Our goal is to return our client, a child, to a public school so she can complete her studies for this academic year.

A Florida appeals court last week suspended the order banning her from all Duval County schools. It is believed that the girl’s attacker could be back in school as soon as this week.