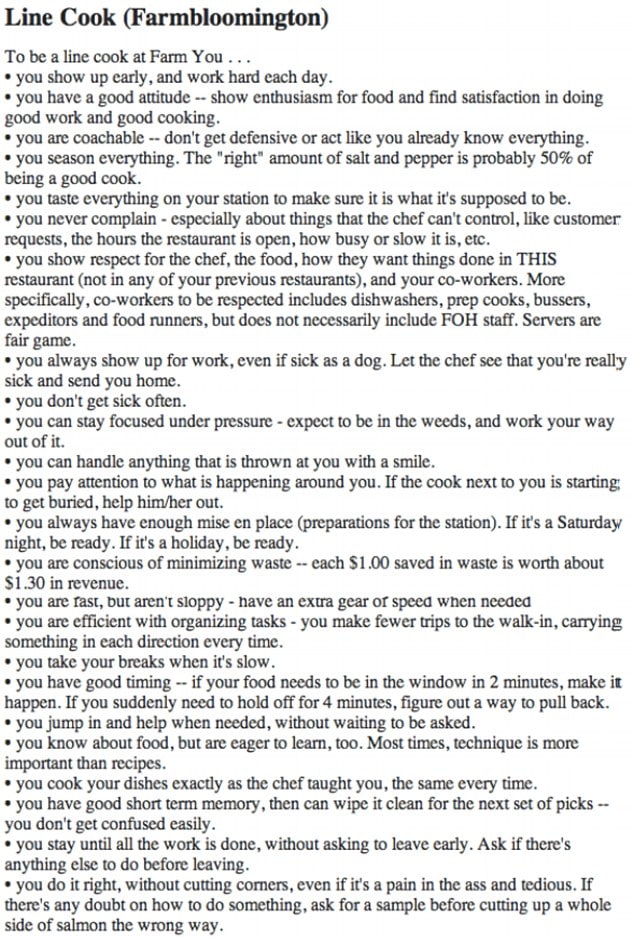 Here’s a job advertisement that found its way on craigslist and is causing some to wonder can such a job really exist and woe to the poor applicant who is literally expected to deliver on one Bloomington, Indiana restaurant, FARMbloomington‘s demands for an in line chef.

Some of the choice demands include the capacity to always smile no matter how much shit they throw at you at the office, never calling in sick and of course never ever complaining about double shifts cause that’s a definite no no.

Or as the ad itself tells:

‘You always show up for work, even if you’re sick as a dog. Let the chef see you’re really sick and send you home.’

‘You are able to work double shifts for many days without days off.’

But in an interesting about face, general manager at FARMbloomington, Harry Shafer has now gone on to say that the sous chef (yes pass the buck) put the ad up without reading it thoroughly:

‘It was taken down as soon as we were aware of the negatives listed. I promise that the ad does not reflect the kind of business we run.’

Harry Shafer also goes on to add just in case you are still salivating at the chance of working for Harry and his delicious crew that at the end of the day life at FARMblookington is hunky dory:

‘Although we do run a tight ship and a very professional kitchen, I promise you our staff enjoys themselves while they are here (at least as much as someone can while working).’

And then there was this comment on the web that caused me to ruefully smile:

if i ever eat at farm bloomington, remind me to tip the line cook, not the waitstaff…