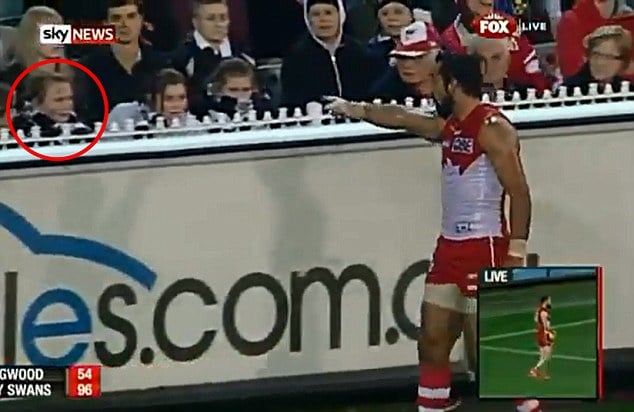 National debate has ignited in Australia pursuant to an incident which saw star Aussie rules play Adam Goodes affronted when a 13 year old girl called the Sydney Swans forward an ‘ape.’ Repulsed by the girl’s comments, who was a Collingwood fan, the player of Aboriginal Australian descent demanded that the 13 year old girl be escorted off the Melbourne Cricket Ground for her derogatory comments.

‘To come to the boundary line and hear a 13 year old girl call me an ‘ape’, and it’s not the first time on a footy field that I’ve been referred to as a ‘monkey’ or an ‘ape’, it was shattering,‘ he told the ABC.

Since the incident which occured Friday night, commentators have gone on to wonder out aloud whether Adam Goodes was too heavy handed in his reaction to the young girl’s comments and whether it would have simply been easier to have had a quiet word with her by the edge of the field instead of having gone on to make an example of the young girl.

Adam Goodes for one has maintained that the issue of racial prejudice ought to have been addressed although he does not hold the 13 year old girl personally responsible as in his eyes he holds the girl too young and innocent to fully understand what she was saying, going rather to suggest that the girl was only repeating what so often is casually said in public spheres. A prevailing attitude that Adam Goodes decided to arrest via the guise of a thirteen year old girl who some have wondered has gone on to be vindictively punished in social media forums more than the slur necessary warranted.

Since the rebuke, Adam Goodes has gone on to take to  to his Twitter feed to announce that the girl had been in touch with him and apologized for her actions.

Speaking to the  ABC, Adam Goodes explained just how damaging it was for him as an Aboriginal Australian to hear her words.

‘I’ve had fantastic support over the past 24 hours,’ Goodes said.

‘I just hope that people give the 13 year old girl the same sort of support because she needs it, her family needs it, and the people around them need it,’ said Goodes to the ABC.

‘It’s not a witch-hunt, I don’t want people to go after this young girl.

‘We’ve just got to help educate society better so it doesn’t happen again.’

To be sure Australia has a history where indigenous persons, Aboriginals have ever since the first settlement of white Australians in 1778 seen their populations wiped out drastically, lands and resources that they once controlled taken away from them as well having to be exposed to centuries of oppression and prejudice where segments of the population are incarcerated at a higher rate than other segments of the population, including incidences of poverty, alcohol addiction and general displacement in Australian society.

Which leads to the provocative question: Was it a silly mistake by a 13 year old girl who didn’t realise the meaning of her words? Or is it a wider reflection of Australia’s tolerance towards discrimination in general?

Adam Goodes has gone on to tell that police in Melbourne had asked him if he wanted to press charges, but that he did not want to – preferring the girl instead undergoes an education program instead.

Then there were these reactions on the web that made me wonder as well:

Why does a racist remark by a 13-year-old girl at an AFL match become headline news? I don’t support what she said, but this was a child who did something wrong and was frogmarched by security guards out of a football stadium in front of tens of thousands of fans.

Where were the adults with whom she was at the match? Where were her family when the TV networks filmed her public apology? Yes, what she said was out of order but is she going to learn anything positive from this experience, and what kind of treatment will she get at school on Monday?

Our role as adults is to set an example for our children and to ensure that when they transgress, we show them what they did wrong and teach them the right way to behave. As a teacher with over 50 years’ experience, I doubt if this child will have learnt much from the way this has been handled.

It’s about ‘how did we get here’? ‘How do we end up with a 13yo yelling racist comments’?

She’s not alone, and she’s not alone because kids hear all sorts of racist, sexist, homophobic rubbish at home, then they go and repeat them without really understanding JUST how appalling it is for a person to hear them.

The mother is quoted as saying that she thought Adam had ‘some issues from his childhood’ which meant that he reacted worse that he should have done for the comment.

What does that tell you? That the mother clearly doesn’t understand how a comment actually becomes racist, and why it is so important to avoid.

If my husband had been called a gorilla when he came back from the antarctic with a huge bushy beard it would have been funny, simply because the word has never been used against him as an insult.

When the word has been directed at you in a derogatory way for decades, then it clearly becomes racist.

The fact that a 13-year-old girl, a child, abused an AFL player during a match is disturbing. The fact that the same 13-year-old child was seen in tears as the lead story on national TV news on Saturday night is disgusting.

Did using your position of power as an elite sportsman to humiliate a 13-year-old girl make you feel better about your lack of courage to stand up for yourself as a teenager?

It seems to me that this incident is an example of two things that are a blot on our society: ”political correctness” having gone mad and highly paid sports people taking themselves far too seriously.
.