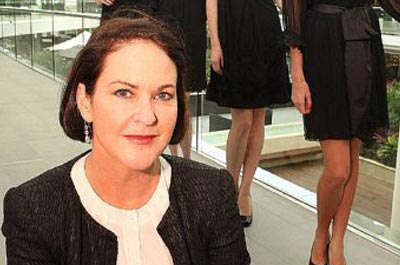 Former Australian Vogue editor Kirstie Clements who unceremoniously found herself being sacked last May has come out with a book where she hopes to expose the fashion industry for what she believes to be less than stellar behavior.

The book, titled ‘The Vogue Factor‘ tells how some models eat tissue paper to feel full, starve themselves for days on end, spend frequent stints on hospital drips, and are often so weak with hunger they struggle to keep their eyes open.

Her book tells of episodes whereby a model who was getting good work in Australia starved herself down two sizes in order to be cast in the overseas shows … the Vogue fashion office would say she’d become ‘Paris thin’.”

In one of her revelations, Clements goes on to tell how she once spent three days on a shoot with a model who didn’t see her eat a single meal – and that on the final day she could barely stand or keep her eyes open.

Clements also reveals how one Russian model once told her that her flat mate was a ‘fit’ model – a model whose body is used by top designers for clothes-fittings – and therefore spent lots of time on a drip.

Clements spent 25 years at Australian Vogue – her book’s subhead is ‘from front desk to editor’ – and steered the ship for 13 of them.

Nevertheless, Clements’ departure was sudden – called to a meeting one morning and dismissed, forced to clean her office and leave without bidding farewell to her staff – subsequently replaced by Edwina McCann, editor of Harper’s Bazaar.

Clements went on to describe her sacking simply as a ‘regime change’ that was part and parcel of the dramatic Vogue narrative, but some critics believe the new book – her first – is her way of exacting revenge on the Rupert Murdoch-owned title.

And then there was these comment I came across via the web that made me wonder as well:

Yes they are way to thin BUT these models chose to starve themselves. If models revolted and refused to starve themselves or be anorexic looking then the anorexic “norm” in the fashion and entertainment would quickly disappear. They are their own worst enemies. In the 80’s none of the models were sickly thin and they were way more beautiful than models nowadays.

Vogue Australia was a shockingly dull magazine for many years. Clements had allowed a fabled and internationally renowned title sink so low, its monthly sales were pitiful compared to competitors. On the odd occasion I’d buy a copy, I would marvel at just how poor her journalistic instincts were, and just how bland the design and layout had become. Australian Harper’s was a far superior title, and Edwina seemed to steer that magazine from strength to strength. Clements might be bitter about being sacked, and publishers are notorious for being brutal when replacing staff, but she can hardly blame them for wanting to get rid of her.