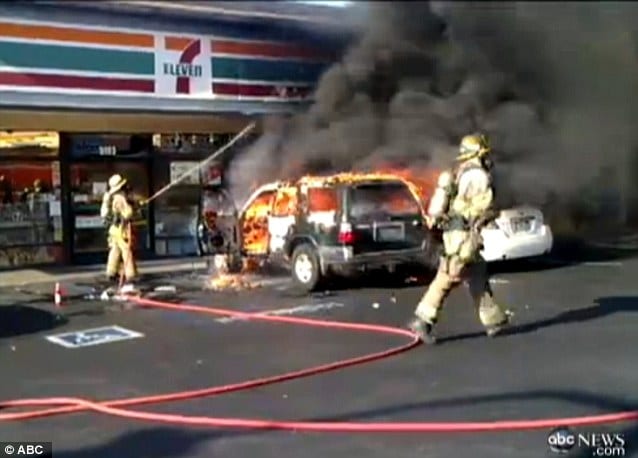 A Long Beach, Californian man remains in critical condition after being doused in flammable liquid whilst sitting in his SUV after declining a homeless man’s requests for money.

The incident which took place outside of one local 7-Eleven Californian store this past Friday afternoon came to a furor after the 38 year old homeless man, Raymond Sean Clark took exception to his victim’s unwillingness to give him any money as he dropped by the local chain. It wasn’t until the man returned from the store to get back in his car that flammable liquid was thrown into the SUV.

The incident itself is said to have left the victim, a 63 year old Californian man in critical condition with third degree burns to his chest and face.

Witnesses went on to report that the homeless man was consequently wrestled to the ground as he attempted to flee before being taken in to police custody.

Told one witness who refused to yield his identity: ‘He’s always outside the 7-Eleven asking for money and smoking cigarettes.’

Offered another witness, Robert Linkroum: ‘It was crazy. The vehicle went up in flames immediately, just totally engulfed. It was all flames. It became so hot in 7-Eleven that I moved towards the back of the store because I thought the windows were going to blow.’

At present Clark has been booked on suspicion of attempted murder and for two misdemeanor warrants for failing to appear on other charges. He remained jailed Saturday on more than $500,000 bail.

Responding Police Sgt. Aaron Eaton went on to tell abc that the motive for the attack was unclear, nor was there any indication that the victim and attacker knew each other, he said.

The attack has once again drawn attention on the plight of the many homeless who populate the district and the lack of social services tending to their needs.  Or as one commentator on the web reacted:

Great! So now the homeless animal gets a free home for the rest of its life on the taxpayers dime .

Then again it could all at the end of the day be  a man’s displaced sense of anger in a winner takes all society, unless of course it is just much easier to assert that the homeless man is a scumbag who simply doesn’t know right from wrong…who of course implicitly deserved to be homeless in the first place and too lazy to get a damn job….?