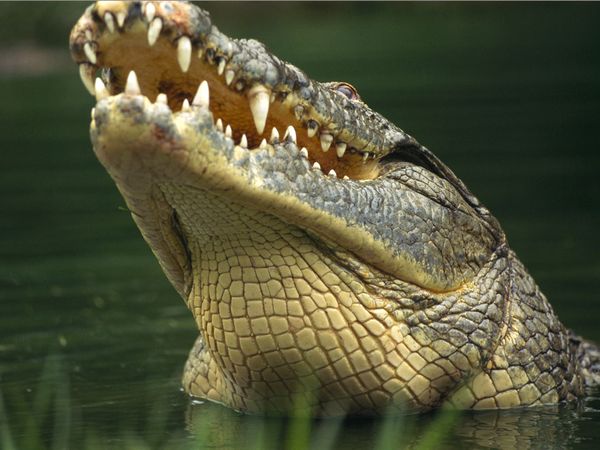 A French fisherman, Yoann Galeran, 29 swimming in remote waters in Australia escaped death after a crocodile latched onto him and put him into a death roll.

Tells Galeran who had gone for a moonlit swim off the remote shores off Arnhem Land in Austalia’s Northern Territory:

“I was swimming, and maybe four or five metres from the boat, I just feel like rocks hitting on my head and something strong and I just realise [it was] a croc,”

“I just had the feeling that if I want to fight for my life, I just need to move all my body as much as I can. He just hit me on the top, on the left side, and on top of my neck and tried to push me down in the water… I punched him anywhere.”

Continues Galeran whose head for a split second found inside the crocodile’s mouth:

“I didn’t think about dying,” he said. “It was going so fast — everything happened in less than five seconds and then I fell free… I only thought about fighting to stay alive.”

“It felt like a big stone or something coming on my head,” he said.

“I just thought for sure that is a croc and I started to think the only thing to do was to move my body as much as I can.”

“We’ve walked out on the back deck and Jo’s standing there with a big grin on his face and blood pouring out of him,” she said. “It’s lucky he’s a fit, strong bloke and was able to fight off the croc. A smaller person or child would have killed.”

Goes on to say the skipper of the fishing vessel via the UK’s telegraph where Mr Galeran works, Craig van Lawick, added: “It wasn’t until he got ashore and saw the claret flowing that he realised it was real.”

Reflected Police officer Vicki Koum:  ‘it was very, very lucky that he managed to swim away – the outcome could have been a lot more dire.

‘It’s just a reminder that we live in the Territory and where there is water, we have crocodiles.’

Crocodile attacks for the rugged man who doesn’t mind the occasional existential wake up call….