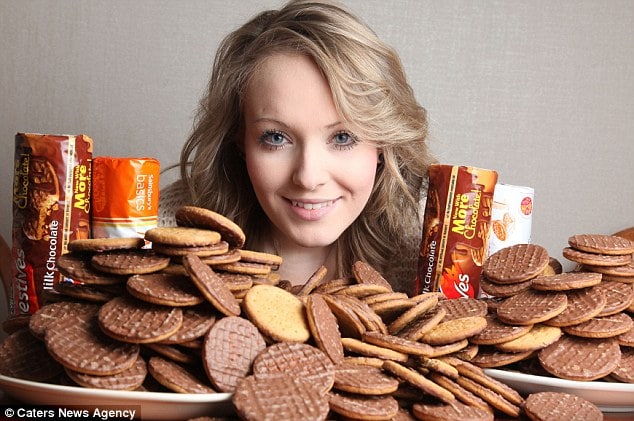 An 18 year old girl, the UK’s Emma Day is making news today after managing to shed up to half her weight to now only weigh 123 pounds simply by resisting sweets. Making her weight loss even more special is the fact that she is now seen modeling agencies knocking at her door.

The UK’s dailymail go on to tell how Day’s binging first began whilst in primary school where she managed to find herself weighing as much as 168 pounds.

By the time she was 15 her weight had escalated to 213 pounds where by now she was constantly being ribbed at school for her weight.

Reflects Day during the tumultuous time in her life:

‘I was one of the first girls to hit puberty and it was horrible. I would just come home and comfort eat a whole packet of chocolate digestives.

‘I also drank about seven hot chocolates every day. Some nights I would go to my grandma’s for supper and then come home and have a second one with my mum. I hid the junk food I ate from my mum.’

Unfortunately this only led to Day putting on more weight and continuously harassed at school and thus once again beginning the vicious cycle all over again.

‘It was just awful and for about two years it was really bad. I was always off school and would pretend I was ill.

‘I remember one time I ate raw chicken to make myself sick so I didn’t have to go in to school.’

Eventually Emma’s mother intervened and helped her to swap biscuits for salad. From there the pounds started to drop off almost immediately.

‘I started eating fruit and vegetables instead of biscuits and snacks,’ says Emma. ‘I used to have sugary cereal or biscuits for breakfast but now I have fat free yoghurt and fruit I feel so much healthier.’

A part time job as a waitress also helped Day quickly shed weight thanks to all the physical effort her position demanded.

‘I’m always running around and on my feet. There’s no way I could have done that before.

‘I can now run around without getting tired and I am so much more toned. Talking to people at work has given me my confidence back too.

‘I was told every day that I was a fat nerd. I only had one friend and absolutely no confidence. I was afraid to talk to people and kept myself to myself, but now I just don’t hold back.

‘I feel so much healthier now. Before I wouldn’t even wear trousers because I looked awful in them.

‘Now I can wear anything I want and I have so much confidence. My mum calls me a chatterbox because I will talk to anyone.’

Emma Day has since been able to advance to the second heats of  Miss Teen Queen UK and these days finds herself fielding enquiries from modeling agencies.