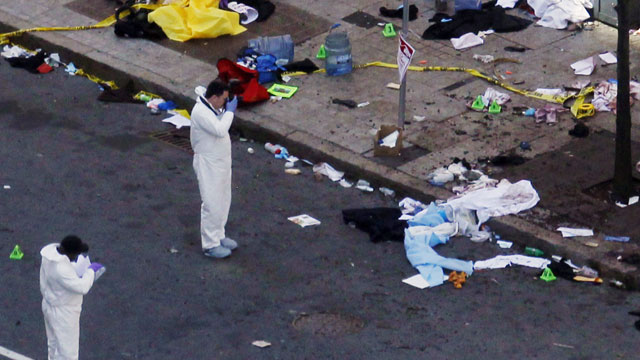 The media still can’t believe no one has been arrested…

Hysteria continues to run rampant as the rush to bring said perpetrators of the Boston Marathon Explosion to justice.

In the space of the last hour and a half, media outlets have been rushing to release the story that a suspect has indeed been brought forward by authorities. The story supposedly first came via afp.

Nevertheless the UK’s Guardian (yes who better to trust what goes on in the US than a foreign media outlet) has told that authorities have not at all apprehended anyone or brought any suspects in for question in relation to the Boston Marathon Explosion. Tells the outlet:

Boston Police have tweeted that there has been no arrest in the case.

CNN has now retracted its report that an arrest had been made. The network has now broadcast three separate contributors citing multiple unnamed sources each that there has not been an arrest, contrary to John King’s earlier report. One of the contributors was Tom Fuentes, former assistant director of the FBI, now on contract to CNN.

The Associated Press has not yet retracted its report that “a suspect in the Boston Marathon bombings was taken into custody.” (editor’s comment, they have indeed momentarily retracted their earlier report).

But perhaps more hauntingly is the FBI’s issuing a warning not to the public, but to the media, urging it to exercise caution. Could it be more laughable? Then again ought we really be surprised with so many advertising dollars at stake and every media outlet and it’s dog scrounging for that leak or first minute news report that will bring them all those advertising revenues.

Contrary to widespread reporting, there have been no arrests made in connection with the Boston Marathon attack. Over the past day and a half, there have been a number of press reports based on information from unofficial sources that has been inaccurate. Since these stories often have unintended consequences, we ask the media, particularly at this early stage of the investigation, to exercise caution and attempt to verify information through appropriate official channels before reporting.

At present the public can only wonder what to make of the incident which has served to make not only them uneasy and weary but that of the media who specialize in the uneasy and queasy.

Terrorism, domestic plot, right wing or left wing agenda or just some lone sicko, it has all served to underly the insecurity and symptomatic degree of violence inherent in America these days, regardless of who planted the bomb. One thing is for sure, the degree of strife, fissure and conflict and the resulting violence has never been greater and for what it is all worth, the media is primed to score that scoop, assuming of course it doesn’t unceremoniously trip over its feet to give you all the news that’s fit to be printed….

The US media is a half baked farce.

If they don’t have a story they just make something up.

If they do have a story and it doesn’t fit their agenda of the day, they just make something up.