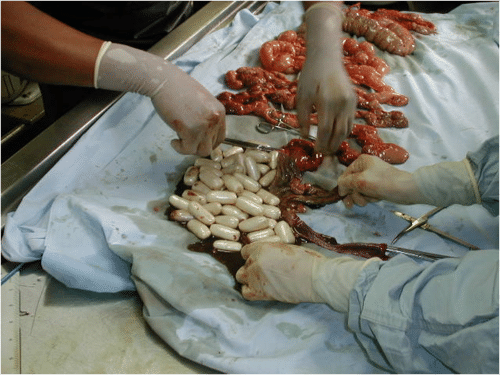 Kids have you ever thought what the insides of a drug smuggler (mule to be more succinct, but normally not the same person) really look like? No, neither have I. But judging from the above tantalizing picture it can be one heck of an interesting sight. Which of course raises some pressing questions. Who in their right mind would subject themselves to such a task? What goes on in their mind as they nonchalantly (you really couldn’t get away with it any other way- or could you?) wait for their turn to be scanned by airport or border crossings? And what may happen in the end if that shit doesn’t make it to it’s final destination?

Before we begin the indelible task of analyzing the mindset of a drug smuggler let’s all have an attempt to identify the good shit sucked out of this delicious ready to go stomach.

Here’s a primer of the type of goodies drug mules have specialized in importing: anything that will get your ass high: cocaine, heroin being the central preferred goodies as they are easily absorbed by the market place.

And how does it work? Well here’s what wikipedia tells us:

The swallower then attempts to cross international borders, excrete the balloons, and then sell the drugs for profit. It is far more common for the swallower to be making the trip for a drug lord or drug dealer. Swallowers are often impoverished and agree to transport the drugs in exchange for money or other favors. In fewer cases, the drug dealers can attempt extortion against people by threatening physical harm against friends or family, but the more common practice is for swallowers to willingly accept the job in exchange for big payoffs. As reported in Lost Rights by James Bovard: “Nigerian drug lords have employed an army of ‘swallowers’, those who will swallow as many as 150 balloons and smuggle drugs into the United States. Given the per capita yearly income of Nigeria is $2,100, Nigerians can collect as much as $15,000 per trip.”[3]

And here’s some information for those of you considering the act itself or just curious as to how one facilitates such yummies:

Drug mules often take medication to inhibit bowel movements for the flight. Sometimes they are also given tablets to reduce acid production in the stomach. Once on the other side, they are given laxatives and the pellets pass through their digestive systems. If they are caught by customs officials, they are often locked in a room where there is a receptacle of some sort and they stay there until they have passed all the pellets.

Being a drug smuggler involves the tenacity and willingness to swallow a whole range of balloons (usually condoms) filled with the preferred contraband of choice. But that too is a fallacy, for the drug smuggler is not in the business of risking his own life and limb by swallowing all that good shit, rather they employ the services of a drug mule whose job it is to subscribe themselves to the risks of the balloons exploding whilst in transit (which will lead to an instant overdose and insane death) and of course getting caught.

The drug smuggler on the hand is the one that orchestrates the whole operation. S/he is the ringleader, finagling port of call connections, the facilitation of said contraband and finally the distribution of said product via willing port of call vendors. You can rest assured that the drug mule is quite expendable and is paid pittance in relation to what the drug smuggler stands to make. A ratio of 100 to one might be a fair guide.

Which leads to the next question how is a typical drug smuggle orchestrated?

Recalls one individual who I had the pleasure of meeting prior to his arrest for above said crime:

The mule is given a primer as to how to swallow as many balloons, pellets as possible before embarking on their journey. The drug smuggler will usually travel with the mule so as to keep an eye on the mule so that they don’t run off with the contraband. But most drug smugglers will always hire a third party who the mule has no actual awareness of who they are to travel with them. They will usually sit a few rows behind the mule so as to observe their movements and to escort them to their eventual rendezvous once they make it past customs.

Then there are those smugglers who also manage to bribe customs officers to assist in the facilitation of drugs. That too includes corrupt baggage handlers.

Rest assured that at all times that the central figure behind the operation, the drug lord will create as many decoys as possible to obfuscate their identities in the event of a bust. This usually requires a series of decoys, non traceable phones, bank clearance (let’s just say straight up cash or money laundering) and a hierarchy of peons who may or but most likely not know the identity of the higher ups in the chain of command. This is a good thing for a drug smuggler if he intends to stay in business for a while as the punishment for getting caught orchestrating the good shit is onerous.

And now the best part: the psychology of an excursion into the terror land of getting away of it all.

Brave, foolish, fearless, desperate, alter ego or just plain daring and able to manipulate appearances and expectations to the contrary. After all the goal of a drug smuggler is to get their stash through and the guise of a non suspecting attitude, persona is often the more preferable route. Assuming one does not lose their nerve as it is their turn to walk past customs. Which in some way is akin to one of the most exhilarating highs known to man whilst his head jumps off the cliff to never ever land of a few seconds of fooling officials or the sudden horror that possible years in jails lies seconds from now as they wonder to themselves if they should just quietly run to the latrines to remove such contraband, not that the smuggler’s accomplice wont be following them in the latrine too….