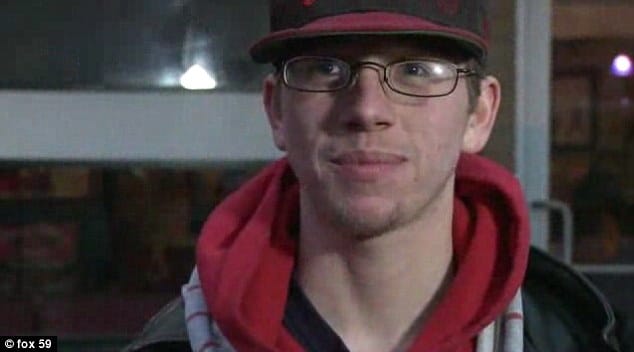 Sometimes fate, chance and compassion all merge together in the perfect way.

Teenager Jhaqueil Reagan one morning set out to walk the distance of over ten miles in snow in the state of Indianapolis for a chance to interview for a $7 an hour restaurant job. Yet somehow by the end of the day he would be offered more than he could have ever possibly have bargained for after a chance meeting with Art Bouvier who also happened to own his own restaurant.

WLFI-TV: It all started on Friday, when Art Bouvier, the proprietor of Papa Roux, a Cajun restaurant in Indianapolis, was laying rock salt outside the establishment after an ice storm earlier that morning.

He said he was approached by a teen who asked him how far it was to 10th and Sherman.

Reflected Art Bouvier: ‘And I’m thinking we’re at 10th and Post. I said, “Buddy that’s probably six, seven miles.” I said, “You’d be better off on a bus especially in this weather.” He just said, “Okay, thank you.” And he kept going.’

Yet later as Art Bouvier drove to his coffee shop he was once again surprised to find the visage of Jhaquell Reagan once again. It was then that he and his wife pulled over and asked the young man if he needed a ride.

The teen, Jhaqueil Reagan, obliged, and along the way, he told the couple that he was going to a Dairy Queen location for a job interview, and didn’t have money for bus fare.

He said that he had already walked three miles before he reached Papa Roux.

Mr Bouvier told Fox 59: ‘I’m thinking to myself, here’s a kid walking almost 10 miles in the ice and slush and snow for the hope of a job at minimum wage.

From there the teen was offered a job at Papa Roux and at double minimum wage which only led to the young man overwhelmed with joy.

Struck by the 18-year-old’s intense ambition, Mr Bouvier posted the teen’s story to his Facebook page.

The UK’s dailymail goes on to sate that the status message took on a life of its own, and currently has nearly 15,000 ‘likes’ and has been shared nearly 4,000 times which in turn led to Jhaqueil Reagan calling to see if the job offer was still on the table, which naturally still was.

Art Bouvier offers since the posting, messages of support for Jhaqueil have been coming from all over he world.

The 18-year-old told Fox 59 that his mother died two years ago and he was looking for a job to support his brothers and sisters. He had to drop out of high school and recently got his GED.

Jhaqueil, told WRTV-TV that he’s now looking forward to getting an apartment closer to his new workplace, so he doesn’t have to walk as far.

In addition, Fox 59 reported that IndyGo, the Indianapolis’ public transportation authority, has stepped up and given Jhaqueil a year’s supply of bus passes.

The moral of the story? A commitment to the greater cause at all will and peril can often evoke an even loftier payback courtesy of the universe who from time to time keeps us inspired and believing that if one applies themselves good things will happen cause the world is preternaturally a good one. Or is it?