Anne Riggitano’s boyfriend Drew Heissenbuttel tried to get her off drugs.

Ashley Riggitano: Fashionista who jumped off George Washington bridge was urged to overdose.

A 22 year old fashion intern, Ashley Anne Riggitano yesterday took her life after throwing herself of the George Washington Bridge circa 4.40pm.

As she leapt she left behind a Louis Vuitton handbag (is this almost the perfect fashionable death?) where Riggitano singled out 5 individuals who made her very unhappy and one suspects the reason why she chose to take her life. Interestingly she went on to demand that those same individuals be not allowed to attend her funeral.

Wrote the tormented fashionista: “All my other ‘friends’ are in it for gossip. Never there.”

And then there was this as well:

nypost: She also directed her rage at a man who she said hadn’t treated her well. That person was invited to the funeral, but Ashley wrote she hopes he “gets what he deserves” when he gets there.

From what it is becoming known about the case it appears the individuals she referenced in her suicide note were either colleagues/friends from college. Prior to her death the stunning blonde had interned for NY based jewelry and fashion designer Alex Woo.

As authorities continue to assuage the girl’s notes it is believed she was the victim of rampant bullying. In fact it is also understood the young woman had also attempted suicide in the past.

The budding designer graduated from Laboratory Institute of Merchandising in Manhattan this year.

She had interned at some high-profile fashion companies including Tommy Hilfiger and Nicole Miller, according to her LinkedIn profile.

She started her own business, called Missfits, where she designed and sold her own bracelets. 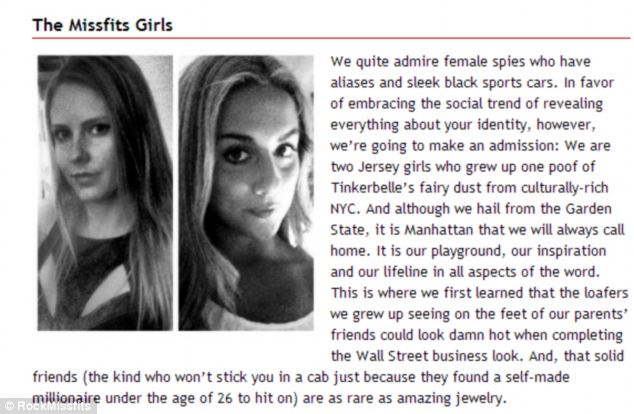 Confounding matters is the fact that the girl was on medications, which were found in her bag, including adderall and klonopin. It is not at this moment whether these drugs were prescribed (were they prescribed?) to deal with her torment or if in some way had contributed to her sense of unease.

The post goes on to note the following ‘according to the notes, it was not clear whether their offenses (of the party of 5) were real or whether Riggitano’s mental state drove her over the edge.’

“Even when I was a little girl I always knew I wanted to be a designer,” she wrote on their Facebook page. “I always had the desire to start up a jewelry line and what way better than to start it with my best friend and partner Victoria.’

Yesterday, Van Thunen wrote what is now a cryptic message on her own Facebook page:

“Those who incessantly blame others as the cause of their issues should perhaps take a step back and reevaluate these situations. The common thread may be that ‘they’ aren’t the problem, but rather that YOU are.’

As press coverage increases it has also now been discovered yesterday was the girl’s 22nd birthday.

Then there was this comment on the web that caught my attention as well:

I live in the same area where this girl grew up…and I have two young children who will be taught the value of people, the value of hard work, and the rewards of giving back. I fear this girl fell prey to a culture of vanity and shallow ideals, and I see it all too often especially in this area. My stomach turns reading this article. What a sad girl
.