Seems like Spanish fashion retailer Zara has a problem selling to American audiences. To put it simply its clothes are too small. Or to put it precisely the waistlines it uses are far too small in relation to the ones that we use here in the United States.

dailymail.co.uk: While the brand’s signature slim-fit, fashionable cuts have had huge success in Europe and now Asia, it seems to be having a hard time finding a profitable audience outside major American cities like New York, according to a recent Economist profile.

The article has caused Zara’s customers to weigh in on the company’s ‘tiny’ sizes, which have been labelled as too small for America’s ‘growing waistlines’.

The Economist explained the company’s slow growth outside Europe, writing: ‘Zara has struggled in America, for instance. It sells trendy cuts and slim fits.

The Economist explained the company’s slow growth outside Europe, writing: ‘Zara has struggled in America, for instance. It sells trendy cuts and slim fits. Outside the biggest cities, Americans have long preferred classic, roomier clothes.’

Then again the real issue comes down to perception?

But many brands, other than Zara, have been offering ‘vanity sizing’ for years, which sees customers fit into a size eight when in reality they are a ten or twelve. Model Crystal Renn brought this to an otherwise unaware public’s’ attention when she recently said: ‘I’ve been all the way up to a size 16 and everything in between. Now I’m a six, eight, sometimes a ten, depending on what designer I’m wearing.’ And so Elle.com posed the question: ‘For Zara to do well here, perhaps they’ll need to adopt the flattering – yet unrealistic system as well?’

And the solid answer to Elle’s question is adjusting reality to a preferred version always goes a long way when the practicality of actual reality does not coalesce with current dogma or people’s preferred eating/exercise regiment. 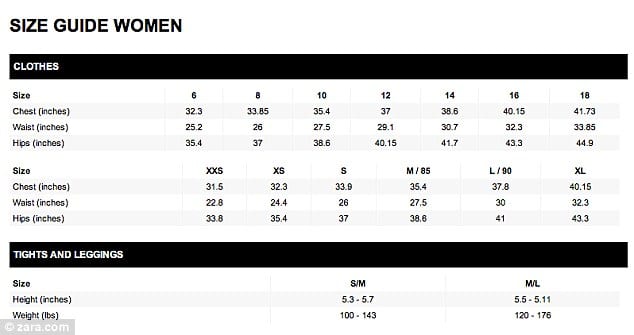