It seems Lolo Jones will always be talked about, whether she’s parading in itty bitty ribbons on front covers, why she’s still a virgin or why she came fourth. That of course has ticked off fellow hurdler USA team mates Dawn Harper and Kellie Wells who came second and third in the women’s 100 meter hurdles final.

In fact Harper and Wells have taken the position that Jones is simply the media favorite and is unfairly clogging the attention of other athletes whose story is equally if not more valid.

Offered Dawn Harper: ‘I feel I had a pretty good story – knee surgery two months before Olympic trials in 2008, to make the team by 0.007, not have a contract, working three jobs, living in a frat house, trying to make it work.’

She continued: ‘Coming off running in someone else’s shoes, getting the gold medal. I’d say I was pretty interesting.’

Had to borrow someone else’s shoes to compete cause she couldn’t afford her own? Because she couldn’t find a sponsor? Whilst Lolo Jones who barely qualified in the women’s team (both Harper and Wells finished at the top of their rank during the Olympic trials) gets all the buzz? Kids is there something wrong here in media land? Then again should the press be held responsible for giving the public what they want: titillation, scandal, and of course near naked women? Maybe if Harper and Wells had posed half naked for ESPN back in 2009 like Jones did they wouldn’t be fuming. Then again why should a woman have to get naked to get attention in the first place? Is that how we value women….?

dailymail.co.uk: During an interview with the show’s co-host Savannah Guthrie, she spoke of her heartbreak over an article published by The New York Times on August 4 which said: ‘She will be whatever anyone wants her to be – vixen, virgin, victim – to draw attention to herself and the many products she endorses.’

The article also read: ‘She has played into the persistent, demeaning notion that women are worthy as athletes only if they have sex appeal.’

It also included a quote from Ms Harper who admitted that she is surprised to learn how open Miss Jones has proved when it comes to her personal life.

Heartbroken? Or just ashen faced that she just might have been called out? Then again, it’s not like Lolo Jones has a publicist calling up all the media outlets telling them what’s big with her. Or does she?

In her defense though, Ms Jones adds the following with respect to the nytimes piece:

‘They just ripped me to shreds and I just thought that was crazy because I worked six days a week every day for four years for a 12-second race and the fact that they just tore me apart… it was just heartbreaking.’

She added: ‘I think it’s such a shame I have to deal with so much backlash.’

Then again isn’t backlash what the media thrives on in the first place? 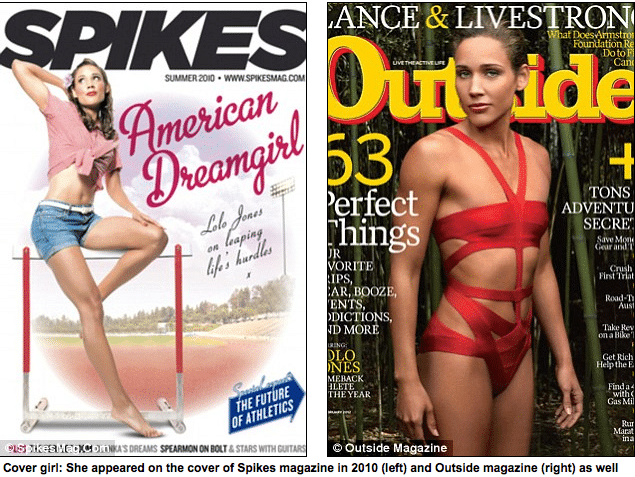