Gabby Douglas‘ fans are up in arms with NBC after their decision to air an immediately after the gymnast’s gold medal victory depicting a monkey doing gymnastics.

That said viewers have spoken out harshly against NBC who carry exclusive rights to the 2012 London Olympics for what they believe to be an insensitive and ill timed ad that followed after her gold medal victory. Whether intentional or not, the ad had the effect of reinforcing negative stereotypes that the African American community has fought generations to overcome- that of themselves as inferior, lampooned and on parallel to animals. 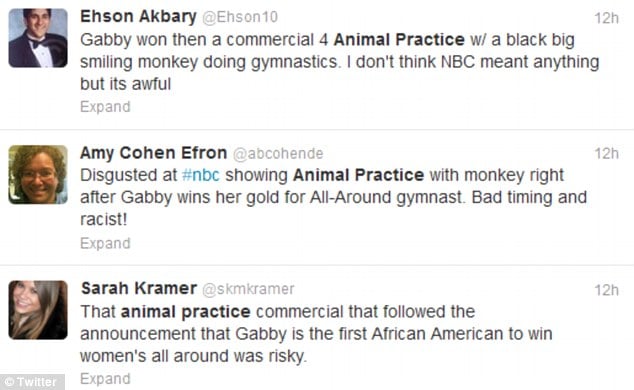 The snafus which elicited a barrage of distressed tweets comes off the back of another race incident involving the gymnast when she was derided by African Americans for having too kinky hair. That too elicited a barrage of back and forth comments via tweeter as well as on our site, where even we were branded part of the problem for simply airing the dissent.

But not everyone necessarily saw the ad that followed as racist, as one youtube commentator reflected: