The battle of the Queens….

It seems the Elton John has little love for that other Queen of pop, Madonna….

The commotion all began when Australia’s Molly Meldrum (who is also a Queen too, just ask him) on behalf of the local Channel 7 program asked Elton John his thoughts on Madonna.

Asked him cause even Molly Meldrum understands that them two bixches can’t stand each other and that nothing sells better than the sight of two has beens throwing regurgitated turd at each other will almost always gets tongues wagging.

Whose tongue did wag though was Elton John who has been having a running hate fest for Madonna ever since she beat him out for best original song at the Golden Globes earlier this year and other perceived slights that has left the diva choking on his mascara set.

“She is such a nightmare. I’m sorry. Her career is over. Her tour has been a disaster and it couldn’t happen to a bigger c**t.

If Madonna had any common sense she would have made a record like Ray Of Light and stayed away from the dance stuff and just been a great pop singer and make great pop records, which she does brilliantly. But no, she had to go and prove… she looks like a fucking fairground stripper.”

Kids I have to be confess my ears are ringing just reading this shit, never mind Madonna who must be rough damaging her entire collection of Elton John dolls down the toilet hatch.

Curses and bixch fits aside I’m willing to bet that Elton John just gave himself a sudden reason to continue living and besides all the other swipes he has taken at her in the past, about her lip synching on stage and dressing in fishnet potato sacks this is just Elton reminding us all that even though his majesty has yet to deliver an original hit in years we can still sit back and take in the sunshine with the understanding that at the end of the day, Madonna and Elton John are bygone relics that have outlived even prehistoric dinosaurs – but that of course wont stop the world from embracing the music that still resonates even after all these years.

Never mind Elton, sometimes a Queen has to share the podium with another Queen, even if they’re hardly as dry cleaned as you are…. 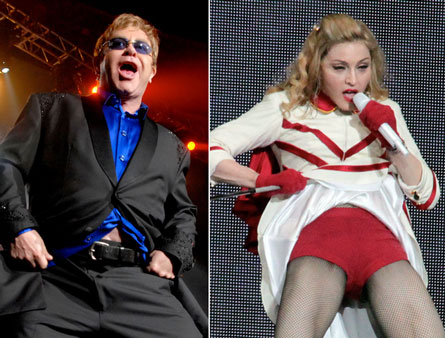