Chrissy Lance is in a bind. That in a nutshell may explain why she has resorted to begging on the street. But she’s not on the street begging for money cause she’s homeless or even hungry. No, Chrissy Lance is standing on one Akron, Ohio street corner because she desperately needs $5000 in order to get herself a breast implant.

With a sign that simply says ‘Not homeless. Need boobs,’ the admittedly flat chested Ms Lance says she was inspired to pursue the idea of asking strangers for money after seeing others panhandle.

“I see people panhandling every day, so why not panhandle for boobs,” said Lance, 37, who lives in Rittman, Ohio. “It’s original. I’ve never seen anybody do it.”

That there may be the strength in Ms Lance’s quest. Who hasn’t smiled or laughed when they’ve come across a bunch of obviously drunken individuals begging for more ‘tequila money?’ Or someone standing with a sign that says, ‘Need to raise $130 because I need to take my girlfriend to an expensive French restaurant so I can impress her tonight.’ It’s the sheer chutzpah and the upfront earnestness of the request that we can all relate to.

And then again begging for new boobs has got to be one of the most revealing, earnest, vulnerable thing one can do, especially a flat chested woman who openly flaunts that she is flat chested. Implied is the notion that our heart strings will be tugged and we will willfully surrender and help where we can. Of course one may also wonder, why a flat chested woman necessarily needs a breast implant in the first place and why she doesn’t choose to revel in her own beauty as opposed to what some  would call an artificial standard.

As a single mom and college student, Ms Lance doesn’t make quite enough money to afford the operation but insists getting new breasts would help her with sense of self esteem.

So how much has she collected so far? According to this morning’s NY Daily News, a paltry $90 and of course a bunch of catcalls. Of course that might all change by the weekend, right gentlemen…? 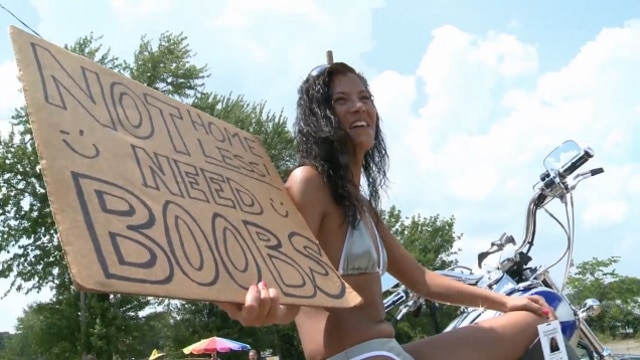