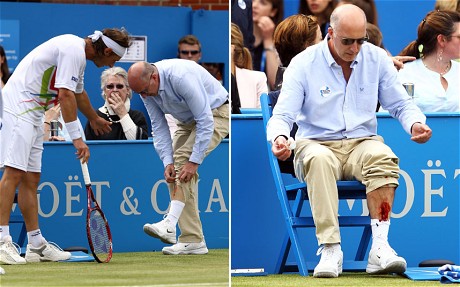 David Nalbandian would like you to understand that deep down he is a spoilt sport, literally, that said he just hopes you don’t take offense the way he did.

Being  a great sportsman as any great sportsman can tell you involves going with the flow, the momentum and that includes accepting decisions that may or may not agree with you as well as behaving with a certain conduct that the etiquette of being a good sport would require. That unfortunately doesn’t seem to hold true for one sportsman, Argentina’s David Nalbanian who yesterday found himself being disqualified from the Queen’s tournament in the UK (a run up to Wimbledon) who as it turned out assaulted a linesman.

The assault occurred as the Argentinian came in to return a forehand which he had little chance of returning from the base line. As the ball travels out, Nalbanian in front of a packed stadium and TV cameras catching every moment live does the unthinkable: he scurries to the advertising hoarding and proceeds to kick at it. Which could be or may not be understandable given the frustrations of the sport, but sitting clearly in front of the hoarding is line judge Andrew McDougall. As you can imagine Mr McDougall for his troubles finds himself bearing the brunt of the tennis player’s outbursts.

From there on, yes just watch the video, Mr McDougall lifts his trouser pant to show a profusely bleeding leg (great work Mr Nalbanian) asking for assistance. From there ATP supervisor Tom Barnes came out to the court and ordered the match to Mr Nalbanian’s opponent, Croatia’s Marin Cilic (who probably wishes he didn’t have to win the game the way he won it). From there Mr Nalbanian then suddenly finds himself being disqualified from the tournament itself. He also now faces a 6400 pound fine. Not bad work for someone who has been a professional tennis player for the last 12 years.

Unfortunately things are only getting worse for Mr Nalbandian (he has already been made to renege on his 36 500 pound runner’s up prize, bringing his losses up to 43 000 pounds this weekend, and who can say what his more than certain loss of sponsorship will now cost him) as he is now being investigated for assault (you decide, did Mr Nalbandian set out to assault Mr McDougall or had he simply been in the wrong place at the wrong time when Mr Nalbandian chose to act the way he did which we of course hardly condone).

At the time of the incident, Nalbandian immediately apologized to the line judge only to have another outburst (yes why bother?) when the ATP’s Tom Barnes had him disqualified (it should be understood at the beginning of each year every tennis player is made to sign an agreement that they will abide with ATP decisions). This only elicited more booing from the 6000 plus strong crowd who had come to watch a revitalizing game of tennis or so it thought.

So what do you think, has sport only become more violent and was Mr Tom Barnes correct in disqualifying Mr Nalbanian who this morning must be thinking the world is against him when perhaps it’s really himself who is really against him?