World condemnation and negative pr fallout has led to Chinese authorities publicly apologizing for an incident in which local officials forced a 7 month pregnant woman against her will to have an abortion. 3 officials have also been suspended.

It may have been the sight of images of a deceased 7 month old foetus replaying the world over that got the Chinese government to publicly repent for having forced 23 year old Feng Jianmei into having a late trimester abortion, this despite the fact that such ultimatums have been to date par for the course.

The incident came about after authorities demanded that the woman who already had a child (a daughter) to give up her unborn child or pay a $4000 fine, something that she could not afford to do.

Offered Deputy Mayor Du Shouping: “Today, I am here on behalf of the municipal government to see you and express our sincere apology to you. I hope to get your understanding.”

China historically has a pattern of denigration of human rights, and hardly rates high on the cycle of women’s rights.

Public apology or not, some commentators are not at all convinced that anything will change going forward, and rather suggest that authorities only issued an apology to save face.

Offered Liang Zhongtang, a demography expert at the Shanghai Academy of Social Sciences:

“They’re just pulling a trick to deal with the public. It’s just a pretense. I think this case will end up being ignored and forgotten like similar cases were in the past. Things have always been like this. Nobody will be fired.”

According to family planning officials, “the correct way to deal with the case would have been for local officials to allow her to deliver the baby first, and then mete out punishment according to regulations.”

The government says the one-child policy has prevented an additional 400 million births in the world’s most populous country of 1.3 billion.

Critics of the controls point out that it leads to a dangerously imbalanced sex ratio. Families abort girls out of a traditional preference for male heirs.

At present  Feng Jianmei nor her husband have publicly responded to the controversy, or is that because they too have been stifled to even respond to the situation at hand? 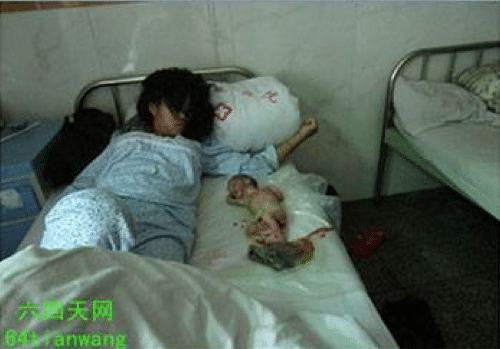