According to salon, it only takes more than a few minutes to do an entire tour of the town of Kermit, W.Va. Then again most people who drop by Kermit with a grand population of 300 don’t come here for the views or the pastrami sandwiches. What they come here for is the open bazaar of prescription pills on open display.

Until the feds were finally able to bust the main drug bazaar of choice, Kermit Sav-Rite (it operated like a deli with up to 6 employees on deck to cater to the steady ebbing and flowing of customers), Kermit Sav-RIte according to some guesses was the choice of those who lived on the eastern seaboard who would travel for miles to get their hands on no questions asked much needed prescription pills.

salon: It handed out Xanax, Lortabs, Vicodin — all manner of the prescription painkillers and anti-anxiety drugs that are crippling Appalachia like a rogue disease — to anyone with an excuse.

Which is all just another way of saying it was a free for all who cared to drop by and many of you did, for years, until the Feds finally put a lock on the place.

But just in case you’re wondering how big the party was, here’s a clue:

The Sav-Rites moved almost 3.2 million dosage units of hydrocodone in 2006, the year the U.S. attorney used to make a case, compared with the national average of 97,000. 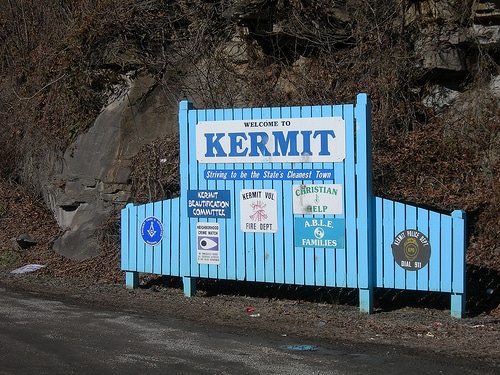 But like most parties that get shut down inevitably new parties spring up, and how:

As soon as a lawless “pain management” clinic or pharmacy is smacked down, others spring up. Investigations take years before prosecutions can be secured.  And pill mills are only part of the problem. Most often, pill addicts get their drugs from friends or on the street. Drug gangs from cities like Detroit, Atlanta and Columbus, Ohio, have also moved in on the action, setting up drug “stores” in residences and other fronts. Almost fondly, people here recall when Oxycontin was jokingly called “hillbilly heroin ”and pill addicts were “pillbillies.”

This of course lead to the inevitable problem of drug dependency, crimes (one would do almost anything to get their hands on their dose of ‘pain management’), child neglect, domestic violence and the occasional fatal overdose. Not some would say anything too different that anyone could find in any big American city, except the Appalachia district isn’t a big city, and for some reason more than many other American cities, pill prescription abuse was rife here.

According to locals, prescription pills like oxycontin became rampant in the 1990’s. It made sense of course as most member in the Appalachia’s are somehow involved in the physically groundbreaking work of mining which would often result in physical distress and of course the management of such distress.

It all came about with doctors who at the time were concerned with the rampant use of pain killers such as percocet and vicodin. Oxycontin, reasoned doctors would be a ‘safer ‘ option reasoned doctors because of its time-release formula. And they were right, as figures as recently as last year showed the manufacturer of oxycontin, Purdue Pharmacy grossing $1 billion in annual revenues. Of course there were a few indiscrete fines to pay along the way (for misleading the FDA, who one wonders why they didn’t do enough due diligence) but sales are as buoyant as ever, and as a courtesy to authorities, Purdue Pharmacy only recently made it harder for oxycontin to be crushed which would inevitably be snorted or injected. 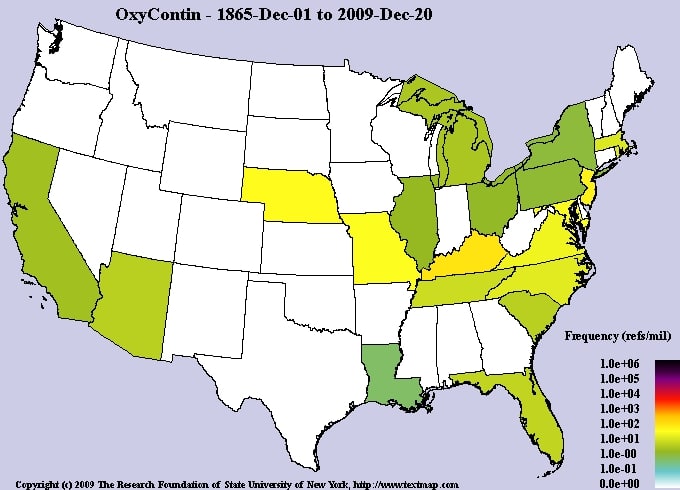 Eventually a task force was established to understand why oxycontin and its sister drugs, vicodin, lortabs and xanax were being so openly abused. Here is what they discovered:

Research on why points to “social determinants” such as poverty, lack of education and lack of opportunities, said Robert Pack, a public health expert at the East Tennessee University College of Public Health who has been studying pill abuse since 2002.

Of course probably asking any one of the many disenfranchised workers and the many unemployed (as the manufacturing industry has now shifted overseas where it is cheaper to extract and manifest resources) and those in half way homes,mental institutions trying desperately to get off their habits would have elicited the same answer.

But not everyone could stop or did want to stop just because the pill mill of choice Kermit Sav-Rite was no longer in operation, and if they were clever enough they could always figure a way to make a buck and continue enabling their habit:

Most ended up on the Oxy Express, driving 15 hours with others, every two weeks, to central Florida to obtain scripts from pill mills there. Until recent crackdowns in Florida, it was the go-to place for pill heads from Appalachia to get their drugs. They’d buy cheap prescriptions and come up and sell them for five times what they paid. The general price on the street for pills is $1 per milligram, so that a 30 mg. Lortab costs $30. But in rural southern West Virginia, because of the demand, the pills cost more: 30 milligrams for $40, 90 milligrams for $100.

Of course now that Florida is getting a tricky venue to get access to, Georgia has now become one of the many new go to places, with many returning back to town with excess supplies to supply friends of a friend or just maybe the generally inquiring ‘tourist’ who still like to drop by.

What ultimately makes this whole situation dire is the fact that abuse is likely to remain rampant, especially as the stalemate of rural town economics and as local disenfranchisement continues. Of course one could easily argue if the big cities have meth, crack, coke these rural towns have their drugs of choice too, except the difference here is that these rural towns aren’t cities but small towns where families and friends know each other intimitaly which means if a few fall off the wagon this likely to lead to an entire collapse of the fiber of the towns, and let’s not forget those traveling ‘tourists’ from the Eastern seaboard who like to drop on by to get their fix who in essence serve to prop up the local economy and hard to go habits.

Isn’t it time you became a big pharmaceutical concern and weaned the sanity, strength of your local disillusioned population too? Of course one shouldn’t give up on the local doctor who’s making a pretty penny administering these beauties as if it were cough drops…. 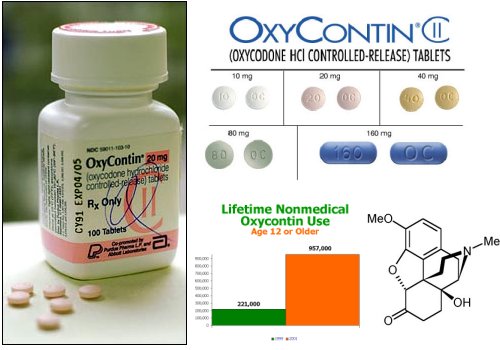