Our frenetic lives 2.0 don’t leave us any time to care for details. Jumping from Google to a Facebook update while twitting our exotic brunch menu is so exhausting. In a sense, ADHD is the pandemics of the 21st century – it’s the TMI era.

Then again, we all imagine art as a discipline which requires an excruciating attention for fine details. But I have to check the Huffpost already! If art does not need such an attention on the part of the beholder, does it need a mastery of details on the part of the artist?

“Details are just mannerism,” says Taliesin, a curious pseudonyms for the frontman of Immediatism, the new artistic movement that premiered at the ArtExpo, on show at Pier 92 in Manhattan this weekend. The Immediatists’ booth got very popular at the ArtExpo: they sold several paintings just on the first two days of the show – quite an unusual performance, given the crisis-ridden art market (except for high end blue chip of course).

A good sales pitch was definitely their discount price, compared to the average in the high four or low five digits of the rest of the show. And the exception of a almost half-a-million huge round metal structure by some Italian sculptor – four hundred thousand dollars, really?

Founder and theorist of the Immediatism movement, Taliesin is the prototypical artist that can sail through the perilous seas of the labor market: architect, sculptor, painter, graphic designer – you name it. These days, you have to know a little bit of everything if you hope to keep eating on the fourth week of the month. Especially in the barren land of Italy, where this gentlemen comes from, with sky-high unemployment and German bankers ruling with an iron fist. Taliesin brought his tools to America and he shows us the paint-dripping instrument he forged to create his paintings. It looks like a funny medical instrument / chef syringe. 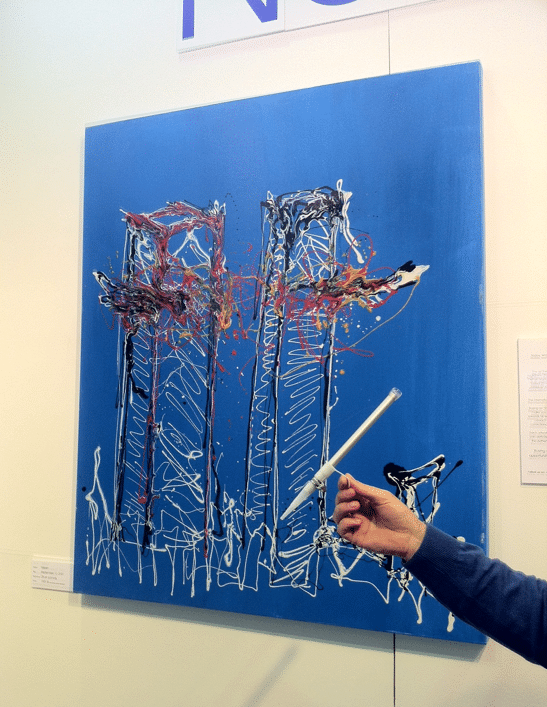 But what about the art itself? You can see it for yourself in these pics – or check their website www.immediatismo.com. We could define it hipster art – so laconic that it totally looks ironic. It is a strange mix of some skeletal version of Futurism and the obvious Pollock dripping-inspiration, as far as the medium goes. The realization is the most distinctive trait: it is instant art. It’s a one-shot creation, which conveys in the blink of an eye the essence of the message. You need just a quick glance to get the whole picture, and then you can look back at your smartphone and finish texting about how cool the show was.

In a sense, Immediatism is an incarnation of the curious effect known to psychologists as the peak shift. We usually think about a complicated pattern, like a face, by only paying attention to its most salient features, say eyes and mouth. When we are presented a Smiley face, we instantly associate it to the whole pattern, even though there are no details at all. To us, the message of a Smiley face is even more significant than a realistic picture of a person’s face. It sounds like the lesson Immediatists are drawing – and it is definitely an interesting one. At least, you don’t have to spend half an hour staring at a wall, trying to decipher what that weird artwork is representing. As I’m pretty busy these days – and I guess I’m not the only one – I think it’s a welcome twist. 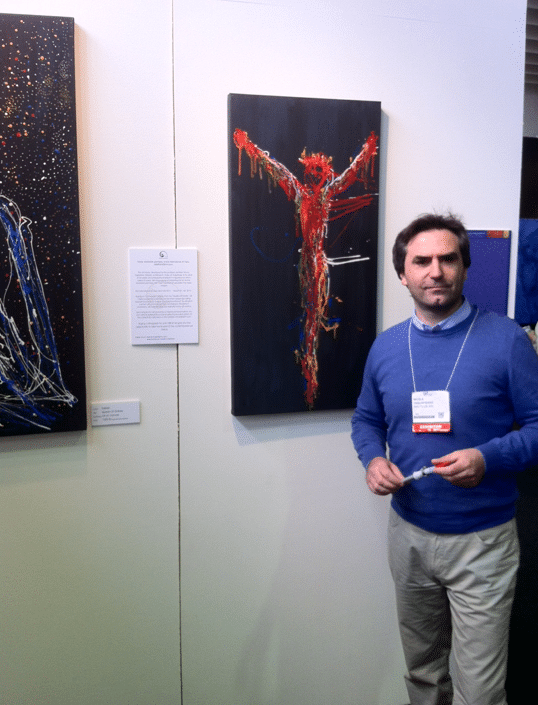