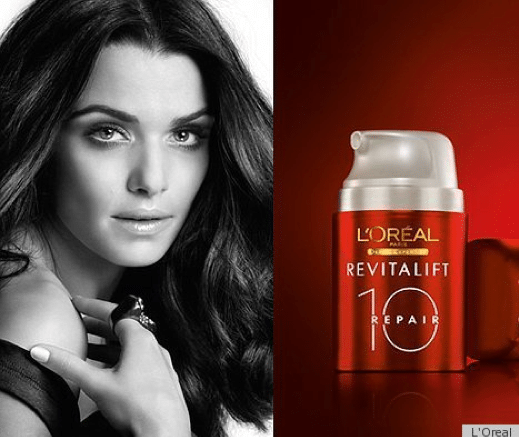 Anything to get you to buy the myth….

It seems the beauty industry has once again found itself in a spot of bother with the release of L’oreal’s latest homage to eternal beauty, youth and good looks featuring actress Rachel Weisz.

The ad featuring an overtly photoshopped Rachel Weisz (although some would argue isn’t that just par for the course these days?) was pulled pursuant to a complaint lodged by British MP Jo Swanson who argued the ad was ‘misleadingly exaggerated,’ and once had again served to create unrealistic pressures on women who’s value increasingly these days, if one observes the consistent milieu of tabloid and pop culture is contingent on her looks.

Said Ms Swinson: “Where advertisers cross the line it’s important that they are held accountable more generally. It’s not purely about women, there’s big pressures on men as well.”

“With the volume of images that contain women as well as men, there is arguably a greater pressure on women but it’s not purely a feminist issue. Along with this idealised images there is also a very pervasive message that what matters for women is how they look.”

Should that really surprise us that despite the gains the women’s movement has made in bringing to focus that a woman is more than just her looks but also her accomplishments, values and her mind? Which raises another question, why does the beauty industry and for that matter the fashion industry insist on glorifying the way a woman looks, and is that to say ultimately no matter how much we congratulate women on their achievements, they are only ultimately to be admired in so much they are able to viscerally stimulate men? 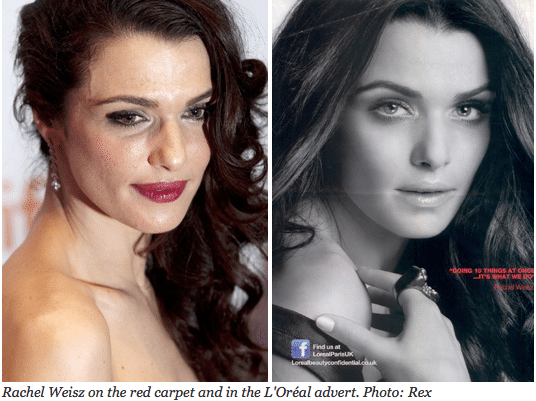 These kind of ads should be banned. They are deceiving. When I was a lot younger and much naive (read: teenager), I tend to believe all these ads and will go about and buy these kind of beauty products, only to realize that I will never get that kind of flawless looks. They are only possible through Photoshop. Could have saved that money and buy Photoshop instead.

Of course implicit in L’oreals campaign is the idea that if you buy their products you will eventually come to look like the woman used in the advertising even if that is never expressly stated, which raised the following observation from another huffpo commentator:

I don’t believe any ad that claims to reduce the look of wrinkles, then uses models that aren’t old enough to have wrinkles or that have been airbrushed­. Anyone that does is just naive. L’Oreal, Revlon, Oil of Olay, Roc, etc. show us real women over the age of 35 that use this stuff everyday. Show us that it really works! Don’t airbrush your models. Show us the truth. The fact is, that these products don’t work like you say they work, so you must use these tactics. Sadly, billions are spent on these lies.

Billions spent on lies which given the status and dynamics as well as pressures of women to conform to certain ideals will continue to lead in women spending many more billions to perfect an image that they have come to understand that they must approximate if they are to find happiness and self fulfillment. Indeed…

Photoshop by Adobe. The parody that’s making you think twice about the beauty industry.

The dirty secrets of the beauty industry.

US Moves Toward Banning Photoshop In Cosmetics Ads

H&M wants to share with you its latest photoshop faux pas.