Personally I have yet to notice them but according to gawker who broke this story courtesy of a gawker alumni’s friendship with a photographer, Adam Krause, who gained their trust and started taking pictures of them, skinheads or neo nazis are the latest fad alongside neo hipsters, neo goths and neo whatever that seems to be making its way in neo Greenpoint, the extended frontier of neo Williamsburg.

After all back when I first lived in Williamsburg back in 2002, everyone and anything intrigued me (gun shots were still part of the scene and crackheads sucking Hasidic men off in their cars was par for the course) but maybe the sight of white dudes with pencil thin moustaches and berets scared the locals too (neo creative). Then again should we be surprised that the whole neighborhood of degenerates and wannabes are finally making their way to the epicenter of over extended douches willing to pay $6 for a cafe latte and causing old Dominican grandmothers to grimace in existential woe when she witnesses her new found neighbors collapsing into vomit heaps at 7 am in the morning.

Reiterates gawker: As a mutual friend pointed out when Krause first showed us the photos, it seems this is more a group of angry young men who are confusing polish nationalism with anti-Semitism than any sort of active organization that poses a threat.

That may well all be true, but from my experience I’ve never been a fan of anything or anyone that pledges too much support towards one sided point of views and nationalistic attitudes. But then again, maybe it’s the Polish community having a hard time acclimating themselves to the plethora of the mosh pit moving in, but let’s not forget the irony that it was Poland that suffered heaviest at the height of anti semitism during world war 2. 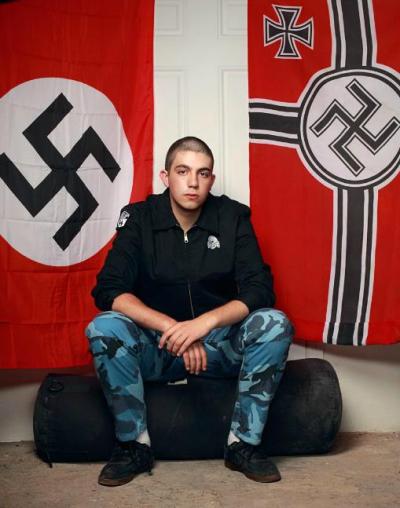