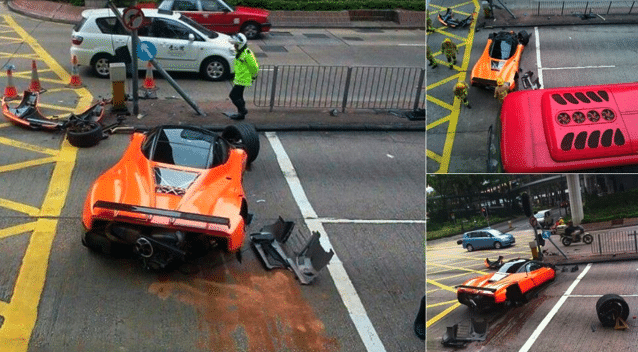 Can I still look stylish and get into Fashion week when I crash my $1.3 milion Pagani Zonda F?

Oh dear. And here I was thinking I was having a rough day when I cracked my 1950’s Cafe de Flore tea cup as I reached for my Gauloise smokes….

jalopnik: The wonderful Pagani Zonda F is certainly rare — just 25 built — and now one’s been crashed in Hong Kong. For the second time. And our tipster thinks it might belong to an exec at fashion house Dolce & Gabbana.

Kids, could it be true? Then again do Dolce & Gabbana execs really make enough money to afford one of these priceless beauties? Well I know one thing for sure the interns certainly can’t….

Pagani’s Zonda F squeezes 750 horsepower out of its 6.0-liter AMG V12, enough to send the car to 60 mph in under three seconds. It’s a unicorn. A crazy, crash-happy unicorn. This is at least the third massive Zonda F crash since the car debuted (and there are possibly be more). 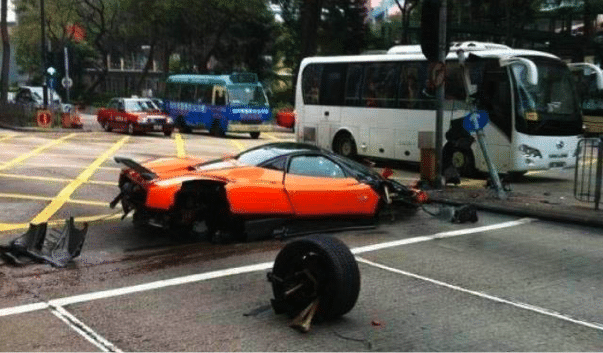 Kids, what is it with these Zonda F drivers? Is it like an extension of someone’s penis that these drivers can’t just rein it in a nozzle? It’s like getting your payday and calling the dealer boy and splurging the shit on the town. Well in this instance splurging it against some brick wall. Then again, who doesn’t like the wet dream of driving a million dollar car with their foot on the accelerator?

This particular car seems to have twisted itself around a poll at high speed, sending fluids out into the street. The entire nose has been scrapped off as well as the rear right-side wheel. Damage to the glorious AMG mill? Yep, looks like it.

Oh well. Will just have to wait for our next pay check to fix the paint job wont we? But there’s more….hmm:

Our tipster also noticed the same car was prominently featured in front of the D&G store in Hong Kong during protests there earlier this year surrounding that store’s ban on photography.

Rumors are circling on the island that the car “belong[s] to one of the top execs of the retailer.”

When in heat, rummage through your executive salary and bonus and buy yourself a Zonda F and promptly crash it against a pole. You’re guaranteed to feel better for it, then again you’ll also feel like the wo/man you’ve always wanted to be….

Oh dear if only I hadn’t cracked my Cafe de Flore tea cup this morning, then again, worse things have happened. Right?