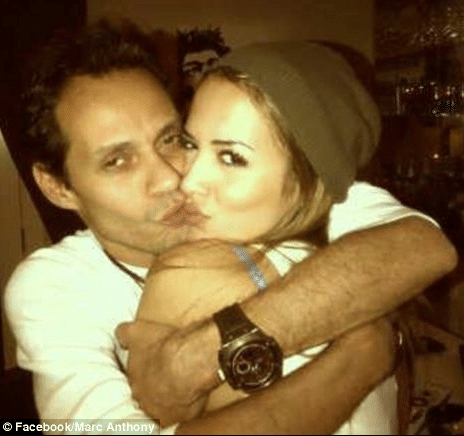 Marc Anthony would like Jennifer Lopez, his ex wife to know he too is now dating his own version of a hot pretty thing. And the good news of course is it didn’t take Marc that long either to find himself something that would have J-Lo biting her lip in agony. Then again all is fair in love and war.

Ahh to be in love, which is what must have compelled singer Marc Anthony who recently posted a picture of himself and his new ray of sunshine, Venezualan model Shannon De Lima on his facebook wall, with the singular word ‘gracias’ (yes indeed…) under the picture. To be sure the two lovebirds seen embraced and smooching set a very photogenic sight- but then again if J-Lo, Marc’s ex can start wacking it with a hot 24 year old bixch, why can’t Marc? After all, why pass up a hot pretty thing half your age? Not me sir…

But to prove his affection for his new piece of hawt ass (I know I’m being mean, but then again J-Lo said I have her permission…) Marc tweeted the following tweet:

Which translated reads: ‘To Shannon, my statue of liberty. Kisses baby!’

The couple who have only recently gone public with their relationship even had the good fortune of having Marc’s adopted son, Chase Muniz to also come out and show his support for daddy’s hot new girlfriend:

‘To all my followers and everybody on twitter follow 2012 best couple and for many more years to come @MarcAnthony and @Shadelima !!!!!’

Hmm, such a treat to know that one can still have family members to publicly start talking about one’s new sex life which of course must be making Marc’s ex, J-Lo smile from ear to ear.

And to be sure another loving tweet from Chase who by now can see that his dad this time has the real deal on his hand.

‘Life is beautiful nothing like being surrounded by the people you love @MarcAnthony @Shadelima !!!!!! #family’

Of course not to be outdone with the public flaunting of hawt delicious precious sexy things is J-Lo herself who has been sure to make sure paparazzos accidentally capture her strolling the turf with hawt bixch Casper Smart.

Don’t you wish you were a public figure desperately still in love with your ex that you will resort to flaunting pretty objects in public in the hope that clears that nasty head cold you get when you look into your empty heart?

This bixch called love just refused to work out between J Lo and Marc Anthony as they now call it quits.